As a kid, I was very active – shocking I know!  I played basketball and softball all the time, that was until the summer before my senior year of high school (1996). I started having GI issues but at that age, who wants to talk about having diarrhea! Eventually, I was diagnosed with Ulcerative Colitis and had gallbladder attacks at the same time. They did a scope, and little did we know, we found out much more with that scope. We didn’t know that our lives would change massively with the next few words that would come out of the doctor’s mouth. Oh, but wait, my doctor didn’t tell us this life-changing news until he was in his car on his way home from the hospital. He called my mom and said “Your daughter has Primary Sclerosing Cholangitis (or PSC), but don’t tell her, she doesn’t need to worry about it. Have a good day.”  My mom went to the nurse’s station, and they were looking in medical books (nothing was electronic at that point) to find out what PSC was. They obviously told me I had PSC, but it never really phased me. I’m lucky because I had never had any issues with my liver. Typically, it takes a long time to diagnosis PSC. 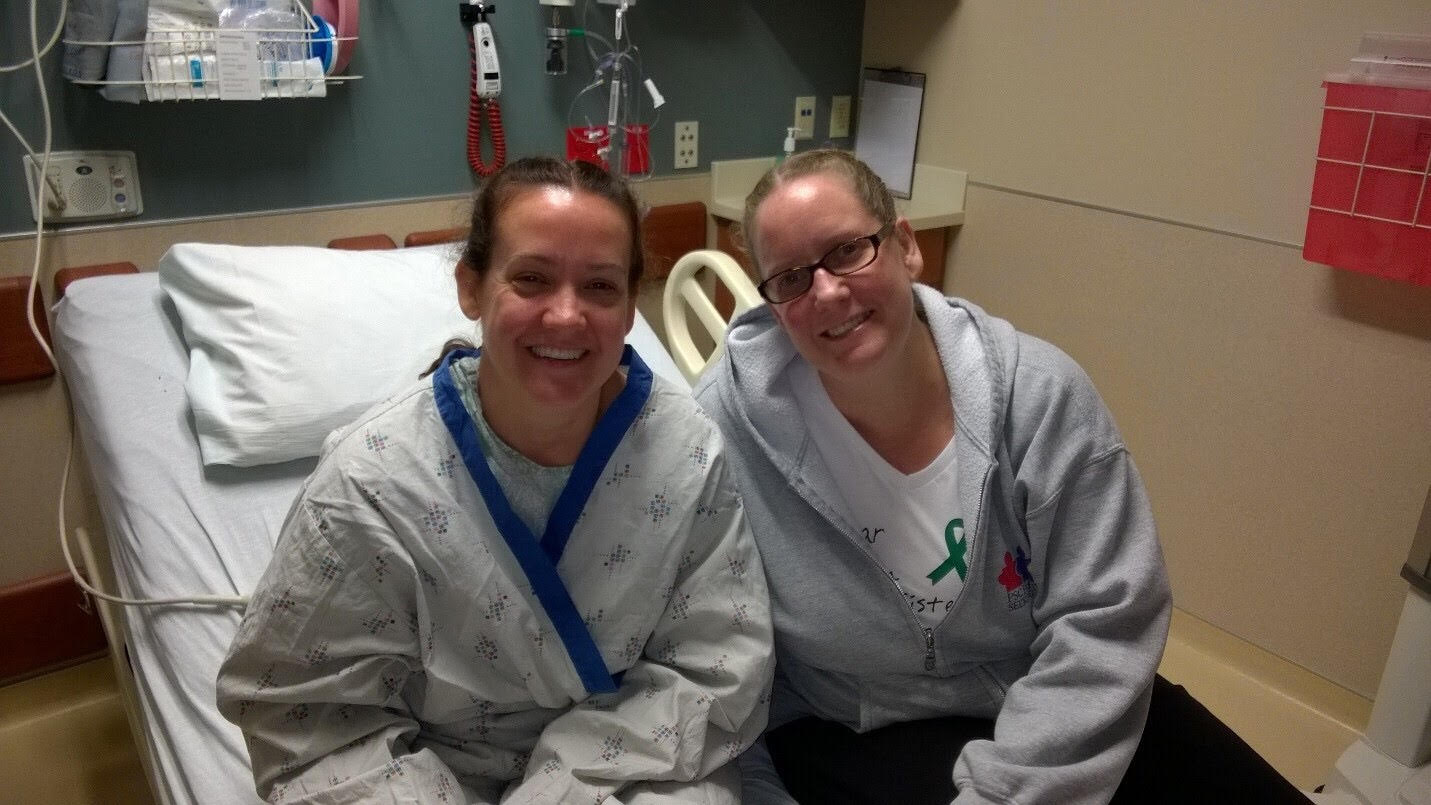 From 1996-2002, my Ulcerative Colitis was the worst. They told me that I would need my large intestine/colon removed and I laughed at them and said, “I don’t think so!”  By 2002, I was begging them to take out my colon. In 2003, I had my tonsils removed, and if you ask my mom, she will tell you that was probably the worst surgery of them all. In 2007, I was diagnosed with Palindromic Arthritis.  My arthritis still comes and goes when it wants and moves from joint to joint, from head to toe and can be debilitating during a flare-up. We have this saying, “When my liver is good my arthritis is bad, but when the liver is bad the arthritis is good.”

In 2009, I was looking for walks to participate in and I found PSC Partners. My mom and I went to the annual conference, and that was life-changing. I didn’t realize that I was having PSC symptoms. I thought I had ants in my pants because I was constantly moving and itching all over my body (kind of like I had ants running all over me). I realized that I was itching because my liver function was declining.

In 2010, I was diagnosed with Primary Biliary Cholangitis (PBC), another liver disease. I didn’t think anything of it; I was like “Oh well, not much I can do about it. I can’t change it so why be mad.” It was then I started having more PSC symptoms and infections that caused me to be hospitalized many times.  From that point on, my body itched ALL over, but not just your normal itch; I felt like I was allergic to my blood.  Severe fatigue caused me to sleep for days at a time. I had pain in my liver daily, nausea, fevers, night sweats, my skin, and eyes started to become jaundice or yellow.  I had so many infections that I couldn’t get rid of that I went on a long-term rotating antibiotic. That lasted about 3-4 years.

In 2013, I had a bad flare up of my arthritis and started having other health concerns as well.  I was diagnosed with Fibromyalgia. My eyes were terribly inflamed, and I was at the eye doctor weekly. My fatigue got so bad that I was sleeping every minute I was not at work.  I had to change jobs because of the decline. My memory was getting worse and more of a concern.  I was diagnosed with chronic airway obstruction; my lung function was decreasing, causing me to be short of breath all the time.

I couldn’t have a conversation without being short of breath, which made it hard to run a meeting.  My quality of life was really affected.  In 2014, I had to move back to my parents’ home because of the decline in my health.  I had to have a hysterectomy because of how my body was responding to everything with my liver. This was when our world changed, even more than we thought it had already; my liver was not bouncing back after my hysterectomy. It was at the cirrhosis stage, which is called end-stage liver disease. Because of the cirrhosis, one of the worst and severest symptoms I had was Hepatic Encephalopathy (HE).

My liver was not able to get rid of the toxins in my body, which affected my brain.  This caused confusion, forgetfulness, slurred speech, poor concentration, personality changes, moodiness. I had a hard time processing everything.  I would sleep for seven days straight; my parents would have to wake me up for meal and meds.

The Impact of Hepatic Encephalopathy (HE)

New Year’s Eve 2014 was a day that I will never forget. I went out to run some errands, and I later realized that I was having an HE episode.  I was driving around the parking lot at Walmart thinking I was supposed to be following my dad in his car, but my dad was at home, and I was driving his car.  I drove two blocks down from Walmart to the chiropractor and asked if my niece was there. They had just closed, and they said to me “Tawny you guys were here earlier, your niece isn’t here.”  I was confused and said maybe she is around the corner, but she wasn’t. I went back to Walmart and spent 3 hours walking around. Every one of my family members called and asked where I was.  The last call was from my sister, Tricia, asking what I was doing.  I said, “I am looking for the olives, we need them for the appetizer.”  The olives were in the same place they had been for years.  Tricia told me to come home, and she would get them later.  I started crying because we needed the olives, but she convinced me to come home. I spent $100 on nothing. As I was driving home I “came to” and realized that I probably need to stop driving.  When I got home, I spoke with my parents and sister, and that was the last day I drove for a long time.

But the HE didn’t stop.  I didn’t understand how a server at a restaurant could take our orders, get our drinks and bring us food – and I had been a server for years.  I cried at church for no reason. When my body decided my day was done my mom would have to take me home from wherever we were, change my clothes, and put me to bed like I was a little kid – I couldn’t do anything.  It was then my parents decided something needed to be done. 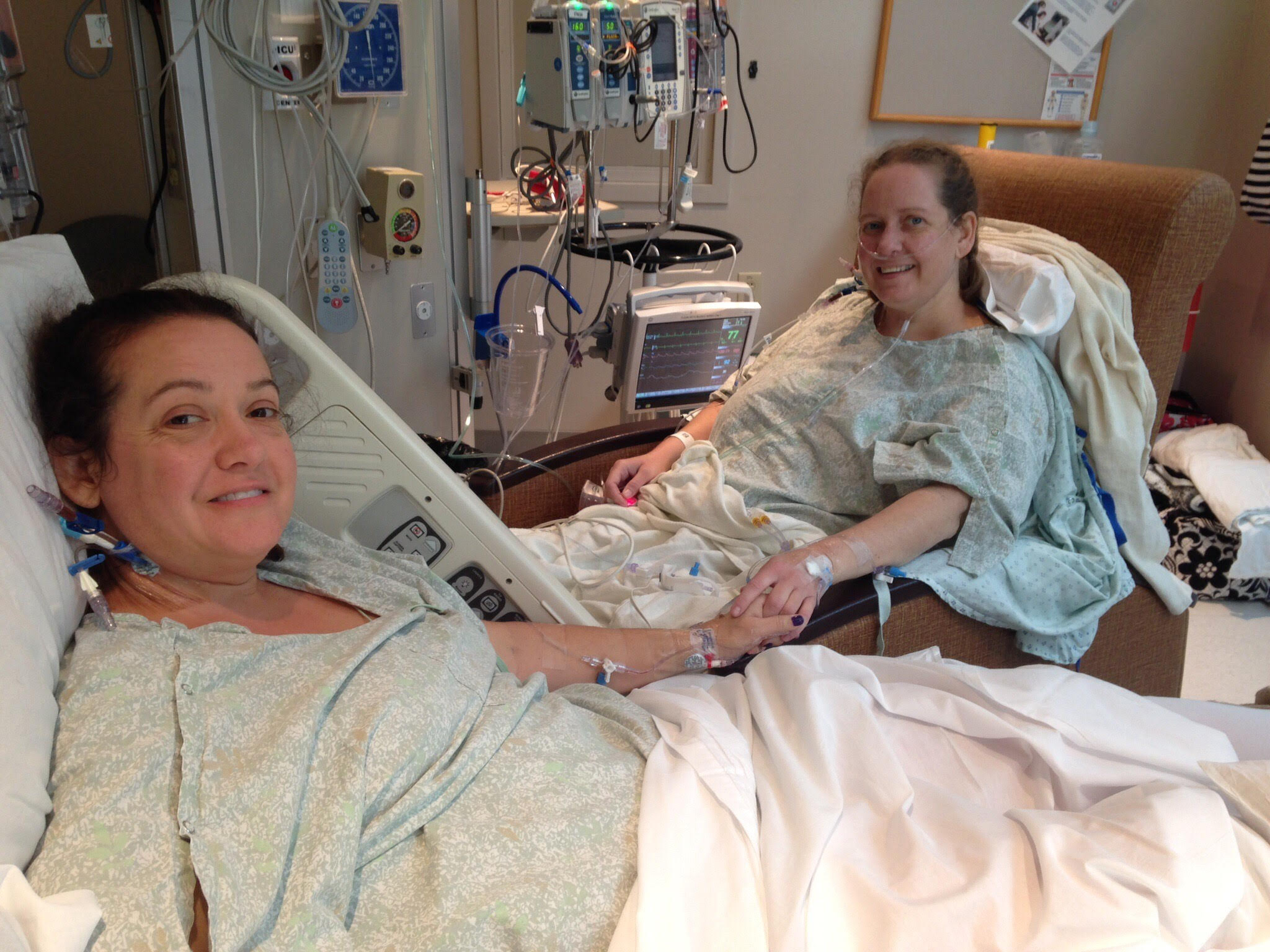 In March 2015, my parents requested a meeting with my doctor. It was recommended that I be evaluated for a liver transplant. But with PSC and PBC, my labs were close to normal and my MELD score (the calculation they use to determine the severity of chronic liver disease) was very low.  Because of my low MELD score, my only option for a transplant was a living donor, or I would die waiting for a deceased donor.  Immediately, even before I was approved for transplant, my sister, Tricia, wanted to know when she could be evaluated as a living donor.

On July 3rd, I was officially listed for transplant!  Tricia called and set up an appointment for the living donor evaluation immediately!  On August 26th, Tricia, my Mom, and Dad surprised me by coming home early. Tricia was wearing a shirt that said “Liver Available for Transplant.” She was so excited she was crying and told me she was approved to be my living donor – we were scheduled for transplant on September 8th!  I could hardly take it in. I was so grateful for the amazing gift of life Tricia was giving me!  Tricia’s gift would allow many new opportunities for my future, and I will always have a part of her with me.  I am so blessed with the support of my family, friends, and fellow PSC family!

On 9/8/15, I had the transplant, and I received 64% of my sister’s liver!  It was amazing.  We were discharged after seven days.  I was readmitted with infections five different times and stayed in the hospital 39 of 56 days.  I ended up having a biloma drain, a biliary drain, a chest tube, and a PICC line so I could do antibiotics on my own at home. It was a rough six months, and my family would agree!  But I got through it, no, we got through it!

Unfortunately, my liver transplant didn’t cure my arthritis, fibromyalgia, or chronic pain. I still deal with severe pain daily and have to take several meds to help with my pain, but they don’t come close to taking it away.  I am not able to work because of the pain, and I also deal with the residual effects of the HE and the fact that it messed with my brain. I still have memory issues and other issues. I also have to take so many meds for my pain and my transplant that those mess with my brain. I get confused at times, I don’t understand the simplest things, and I ask a ton of questions. It annoys people at times, but sometimes I just don’t get it.

A Life of Advocacy 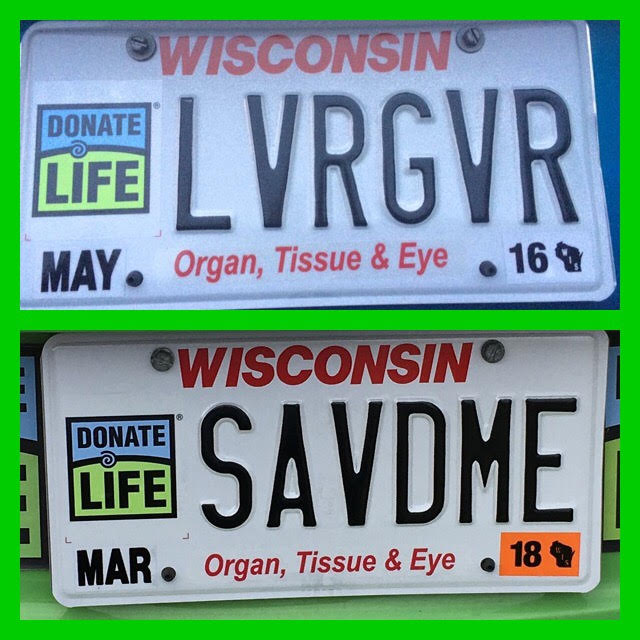 This also plays a role in the reason why I can’t work. Although I can’t work, I volunteer as much as I can at the University of Wisconsin Organ and Tissue Donation, Wisconsin Donor Network, and Wisconsin Tissue Bank and for the BloodCenter of Wisconsin.  The days I get to volunteer I am so excited and happy that I can give back and encourage people to become organ donors and donate blood.  I get to encourage people to help save a life – the lives of my friends and maybe even your family or friends.  When I am not volunteering, I am still promoting organ donation; I drive a neon green car with Donate Life magnets on the side and a license plate that says SAVDME.  I love stopping at a stop light and seeing someone read the magnets; it makes me smile, maybe they will decide that day to become an organ donor or even tell someone about this neon green car they saw.  It starts a conversation.