At the age of four, I was diagnosed with Cystic Fibrosis – a disease that affected my lungs and digestive systems. Even with receiving quality care, my parents were told I would most likely not survive past school age. My parents 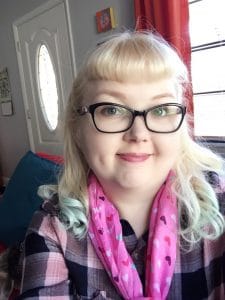 kept me compliant with treatments, medications, and appointments, and as a result, I thrived. I attended school participated in after-school activities, accepted invitations to sleepovers and birthday parties, and was overall an average kid. I graduated high school and met my goal of attending art school, and working in my field of study.

The toughest part of becoming an adult is that I was now responsible for my actions, including taking medications, doing physiotherapy and nebulizers, and keeping up with doctor appointments. As I entered my 20’s, my health began to deteriorate quickly. I was hospitalized multiple times every year with various infections in my lungs. It had become too tolling to keep up with a full-time job, in addition to making my health a priority. Because of this, I went through a period of depression, and low self-esteem. Just as my peers were building and thriving in their careers, I was leaving mine.

One month before my 30th birthday, I received devastating news – I was diagnosed with end-stage Cystic Fibrosis. This meant that my life expectancy was 1-2 years. Even though I felt lousy almost every day, until that point, I had always been able to recover enough to convince myself my health could remain stable. My doctors said my only hope was to receive a double-lung transplant. I was so overwhelmed, crying in the doctor’s office that day. I had never even contemplated a transplant, and certainly not at only 30 years old. I decided that moving ahead with the goal of being listed and receiving a transplant was the right option for me. I underwent four months of testing to determine if I was a suitable candidate to receive and recover from such an invasive option. In May 2012, I received my letter that I was officially on the transplant waiting list.

And the waiting began.

The hardest part about being on the transplant list is the unknown. You are not guaranteed that you will even receive the organs you are listed for, and if you do, how long until that day comes is uncertain. My health continued 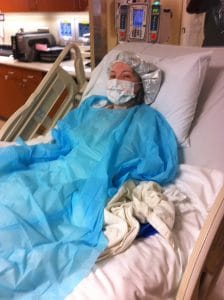 to deteriorate, more time in the hospital than out, frequent rounds of IV antibiotics, needing to receive supplemental oxygen 24/7, and losing mobility. My parents relocated to help me as caregivers. It was difficult for me to let people do things for me, but I had to learn how to ask for help.

In August 2014, I received a call from my transplant coordinator that there was a possibility they had recovered donor lungs that were a match for me. However, it turned out to be what is called a “dry run.” I was prepped for surgery, and during that time the organs were in transit to the hospital. Once they arrived, the surgeons examined the condition to determine if they were suitable for transplant. Unfortunately, the organs were damaged. I was sent home to continue to wait. It was hard to have so much hope, and not know when that opportunity would come again.

One month later, on September 27, 2014, my dad took me to the hospital to be admitted. I was extremely weak, barely able to stay conscious. The doctors decided to do a blood transfusion and anything else they could do not to have to intubate me. If I were to be intubated, I would be removed from the waiting list. The day I was given a second chance at life was September 28, 2014.  I remember waking up in the early morning with a bi-pap mask on, with blurry vision, and seeing my surgeon come in the door and tell me, “we have lungs for you.” I smiled and fell back asleep. I mumbled the words to my Dad when he arrived that morning. He later told me he had to confirm it with the staff because he thought it was a hallucination from the lack of oxygen. Lucky for me, it was true. I was prepped for surgery and received kind words from my friends and family who saw me off into the operating room.

I was in surgery for about 10 hours. My “old” lungs were in such horrible shape; they had to literally scrape them from my chest wall. I woke up in the ICU as they were removing the breathing tube. I was still receiving supplemental oxygen, but I quickly realized that I wasn’t hunched over coughing every minute, with the feeling of drowning in thick mucus. Now the hard work began. Within 24 hours of surgery, the nurses and physical therapists were in getting me up to walk. The first couple of times I was still receiving oxygen through my nose. Honestly, it was more of a reassurance for me. I had been tethered to oxygen tanks constantly for two years. I would have panic attacks thinking I couldn’t breathe when in reality I was breathing just fine. I had to trust that my body would know what to do. 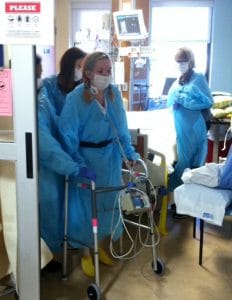 My road to recovery was difficult, but the most rewarding thing I have ever worked for. From being in such poor shape for the 28 months I was on the waiting list, I had developed severe muscle atrophy. I went through months of pulmonary rehabilitation to build muscle, work on balance and coordination, and learn to breathe again.

Every step along the way provided great rewards and many happy tears. Simple things seemed like such great freedom – driving a car again, showering and washing my own hair, walking my dog, keeping up with housework, and grocery shopping by myself. Things that just three years before, I doubted would be possible.

A little over three years later, I am working a part-time job, and attending school online. I wake up each morning, take in a deep breath, and exhale. At that moment, I think fondly of my donor and their family for making the most selfless decision a person can make. Because of them, I am thriving, not just surviving.