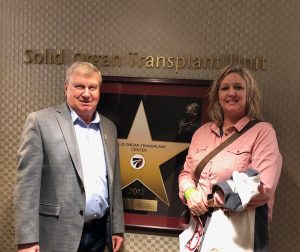 Two years ago, Rhonda’s father went into kidney failure because of his diabetes. At the time, he was 74 years old and just starting home dialysis.

After a year of dialysis, Rhonda told her father that he should attempt to get a kidney transplant. She offered to be his living donor, but he declined her offer. He was worried about his daughter and didn’t want her to take on the risk of being a living kidney donor.

Rhonda is the owner of a florist. One day, a bride came in to discuss wedding flowers. During the conversation, Rhonda found out that she was a transplant nurse. 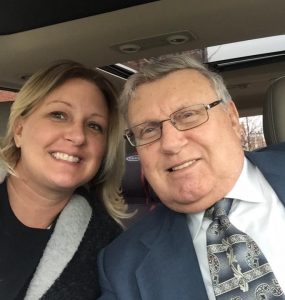 Following that meeting, Rhonda went to a transplant meeting and witnessed all the transplant candidates waiting for an organ.

She approached her father and convinced him that the risk to her was low. She was tested and found out that she was a match.

Rhonda’s husband also helped convince her father to let her get tested.

“He told my father that I would regret it forever if I could have helped and he didn’t accept.”

They made plans to move forward with the surgery. Rhonda, being a florist, donated right after the busy Valentine’s Day season was complete.

Rhonda received support from everyone in her family. Her husband, parents, and staff all supported her and helped her get through the donation. 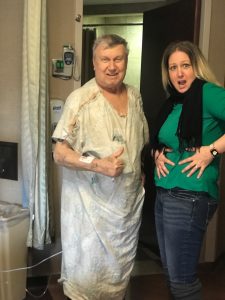 It has been about a year since the transplant, and both Rhonda and her father are doing great.

“He has a whole new outlook on life,” Rhonda said. “Everyone needs to be aware that living donation is possible. If I can do it, anyone can.”

Rhonda and her father are even closer post-transplant. She does everything she can to promote organ donation.

Rhonda credits her transplant center for making the donation as easy as possible.