Terri was born with Tyrosinemia, a rare metabolic disease, where the body doesn’t have what it needs to break down tyrosine. She was in and out of the hospital frequently as a child; something as simple as a cold would put her in the hospital.

Terri’s care began in Georgia, but Terri and her family later moved to Florida. When she was 12 years old, her parents were contacted by her physician in Georgia. They were told that other children with Tyrosinemia were diagnosed with liver cancer. She returned to Georgia with her family and found out that she had liver cancer, too. Terri needed a liver transplant. She began her evaluation for transplant and was added to the waiting list.

“The thought of a transplant scared me, but I was excited that I wouldn’t have Tyrosinemia anymore,” Terri said. 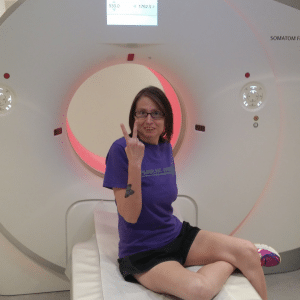 Six months later, Terri was having lunch with her family when the pager went off. Her mother announced that it was Terri’s transplant coordinator. They found out that a liver was recovered that could be a good match for Terri.

When they arrived at the hospital, they discovered that Terri had a fever and they discussed potentially canceling the surgery. Thankfully, her fever broke that she was cleared for surgery the next morning. On July 2, 1991, Terri became Georgia’s eighth pediatric liver transplant recipient. Her donor was an eleven-year-old girl from Arkansas.

“Because of me, newborns in Georgia are screened for Tyrosinemia and other metabolic diseases,” Terri said.

Terri recently celebrated her 28th anniversary with her liver transplant.

To raise awareness, Terri has been sharing her story for over twenty years. She has used running as her platform; she ran in several U.S. Transplant Games and ran a marathon in 2007. “What better way to prove what organ donation does than to see it in action?” She said.

In 2015, Terri went into rejection. The medicine took a toll on her body and she had to stop running. In 2018, she spent the year in and out of the hospital fighting Cryptococcus, a fungal lung infection. “I have had many ups and downs over the years but with or without running, I’m still here and still have a story to tell,” She said.

When asked what advice she has for parents of pediatric transplant recipients, Terri said, “Encourage them to take over their own medicine, doctor visits and such. Encourage them to be their own voice, speak up, ask questions. My mother allowed me to do this early on right after my transplant and I think I am better off for it.”