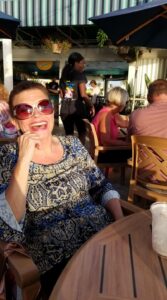 My name is Jody Becker Wilkey, I am a 58-year-old native of Central Illinois, and I’d like to share my organ donation stories.  My first story begins in June 1983, when I was a 20-year-old college student majoring in the Teaching of Spanish at the University of Illinois in Urbana-Champaign.  After five years of saving my pennies, I was finally able to take my dream trip to Spain, never suspecting that that trip would change not only my life, but also the lives of so many others, forever.  I had never been on a plane before, but my mother (a well-seasoned traveler) had told me that I would love flying, and she was 100% right.  I kept a journal throughout the entire eight weeks of my trip, and my journaling began right there on the plane.  My red-eye flight took off from O’Hare Airport in Chicago, and as I was scribbling furiously in my journal, hoping to capture every detail of the experience so that I would never forget any of it, a young lady a few rows up from mine caught my eye.

She soon passed me a note, asking if she could borrow some paper from me so that she could write a letter to her boyfriend.  I tore a few sheets out of the back of my journal and passed them up to her… but instead of using them to write to her boyfriend, she and I ended up writing notes to each other, back and forth, all night long, while the other passengers slept.  By the time the plane landed in Spain the next morning, Kari Kielblock and I felt like old friends, and when we had de-planed, she introduced me to her mom, dad, and aunt, who were all traveling together from their home in Minnesota to Spain to visit a young man who had been a foreign exchange student in their home the previous year.

That student, a young man named Ion, was supposed to travel from his home in Galicia, in northern Spain, to Madrid, to meet the Kielblock family when their plane from the States landed and take them from there to his home.  The only problem was that when the plane landed, Ion was nowhere to be found.  The Kielblocks were woefully unprepared for this unforeseen situation: none of them spoke any Spanish.  They did not have Ion’s phone number (which, since it was 1983 and therefore pre-cell phone, would have been the landline in his home).  They had not exchanged any dollars for pesetas before their flight– which landed on a Sunday– so the banks were all closed, anyway.  In short, the Kielblocks were stranded.  I waited with them, since I had no real plans and since I was more than a little terrified at finding myself all alone in a foreign country (what were my parents thinking when they let me go on this trip?!?), and these were the only people that I sort of knew (even though I had literally just met them).  When it became obvious that Ion was not going to materialize, I decided that we needed to leave the airport and re-group elsewhere.  I had exchanged some dollars-for-pesetas prior to our flight and was fluent in Spanish, so we lugged all of our bags out to the street, and I hailed a couple of taxis to take all of us to a nearby hostel.  When we arrived, I secured two rooms for us (Mr. & Mrs. Kielblock in one; Kari, her aunt, and I in the other) and we settled in.  We called the States to get Ion’s home phone number, but since none of the Kielblocks spoke Spanish, it was up to me to call Ion’s family to find out what had happened to him.  They told us that he had been at the airport, but had gone to the wrong terminal, therefore missing us altogether, and that he was at that very moment getting ready to board a train back home to Galicia.  There was no time to lose.  The five of us jumped into taxis and hurried to the train station, where we caught up with the elusive Ion just as he was boarding his train back home.  There was much hugging, kissing, and crying on the train platform before we all returned to the hostel, where we enjoyed dinner together followed by a good night’s sleep.

The next morning, a Monday, I accompanied Mr. Kielblock to the nearest bank, where he exchanged enough money to reimburse me for everything I had paid for the day before, and then he and the rest of their party departed for Ion’s home in Galicia.  Kari and I exchanged full names and address and promised to keep in touch… and we did, for a while.  But in 1983, long distance phone calls were very expensive, and since the internet, email, and social media had not yet been invented, writing letters via the USPS was our only (slow and cumbersome) option; suffice it to say, Kari and I eventually lost touch with each other.  Fast forward to June 2018: it was the 35th anniversary of my epic trip to Spain, and I decided to write a story on Facebook about how I had once rescued this little family from Minnesota.  And then I wondered: was Kari Kielblock on Facebook, too, perchance?  If so, I could tag her in my post and maybe we could re-establish contact with each other.

Lo and behold, she was on Facebook, so I tagged her.  When she saw my post, she reached out to me, and we began chatting on the phone every week, getting re-acquainted and catching up on 35 years of our histories (marriages, divorces, re-marriages, kids, grandkids, etc.).  During one of these conversations, we talked about our health and how the process of aging was treating us.  Kari shared, quite frankly, that she had a very serious liver disorder and that without a transplant, she would die.  Stunned, I asked her, “So… you have to wait until someone passes before you can get a transplant?” to which she responded, “Actually, right now I’m a really good candidate for a living liver donor transplant.”  Prior to that moment, I had no idea that a person could donate a portion of their liver while they were still using it!  After a few moments of silence, I said, “What can I do?  I want to help.”  Kari, utterly shocked that a (near) total stranger who hadn’t seen her in over 35 years would want to help her, told me that if I was serious, I should go to Mayo Clinic’s website and follow the prompts to sign up to be a directed living donor.  Fast forward again to January 2019.  After all of the preliminary evaluations (bloodwork, telephone interviews to judge my sanity, etc.), it was time for me to travel to Mayo Clinic in Rochester, MN, for a full week of poking and prodding from head-to-toe, to determine whether or not I was a good match for Kari… and I was!  We had our surgeries at Mayo on Monday, February 25, 2019, and three years later, I am very happy to report that both recipient and donor are doing great!

I had such an amazing experience donating my liver that I felt compelled to donate something else.  My Mayo team explained to me that, while I could not donate my liver again, I could donate a kidney someday, if I were so inclined.  Hmm, I thought, that’s great, but how does one go about finding someone who needs a kidney transplant?  Well, God took care of that detail, too, just like He did every little detail in Kari’s and my story.  A lovely lady in my town named Renee Sample was interviewed on our local TV station in May 2020, detailing how she was in desperate need of a kidney transplant.  I did not know this lady at all; nevertheless, I contacted her the next day (again, via Facebook), and we arranged to meet.  After many months and all of the testing, we were scheduled for our surgeries in January 2021… but five days before surgery, we were notified that we were NOT good physical matches for each other, after all.  It was devastating.  Fortunately, our OSF Saint Francis Medical Center teams in Peoria, Illinois, were proactive and registered us immediately in the paired kidney exchange program.  After several chains of donors/recipients were formed and subsequently fell apart, we finally were scheduled for our surgeries on April 15, 2021.  Renee’s new kidney came from an anonymous, altruistic donor in California, and my left kidney went to an anonymous recipient in New York.  That is all that each of us knows about our respective recipient/donor at this point.  Renee is also doing extremely well now, for which I am beyond grateful.  I thank God for my abundant good health, and I love being a member of a very small community of two-time living organ donors!  My only regret is that now, besides blood products, I am out of spare parts to give away! 🙂