The 24-year-old had lost her hands and feet after her Crohn’s disease caused a blockage in her small intestine that caused an infection that developed into sepsis, turning her extremities into dead tissue. To save Ess’ life doctors amputated her hands and feet. Since she was so young and very athletic, Dr. Scott Levin, her orthopedic surgeon at the University of Pennsylvania in Philadelphia, thought she would be a good candidate for hand transplantation. Two years later, she decided it was time.

The procedure requires doctors to reconnect bones, muscles, tendons, nerves, arteries and veins layer-by-layer, using microscopes to attach the smallest components. Microsurgery of this kind has been used for years to reattach fingers in emergency situations, but now doctors are using it in more controlled scenarios to attach a whole arm.

To get ready for the procedure she had to pass a battery of tests to make sure she was healthy physically and psychologically. “I worked out harder, especially my upper body and core, so I was able to handle the amount of weight I was going to be adding onto my residual limbs,” says Ess. After two years of testing and preparation, she was ready. “There wasn’t a shadow of doubt in my mind that this was something that was going to happen.”

With the help of 12 surgeons, Ess emerged with a new pair of hands. Looking down for the first time three days later was an “out of body experience,” she says. She noticed purple nail polish on the thumbnail, which she never wore, and that was a sign that her hands were not hers. “Hands are a gift and they are blessed to me,” says Ess. “So when I looked down I was mourning the loss of the original owner’s hands. I still don’t think they are mine, I think they are ours.” 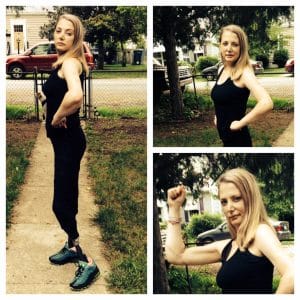 In the first year following the transplantation, Ess went to therapy to gain movement in her hands. About three years later, she now has about 60-percent functionality. Her motivation to keep working hard came from her role model: her grandmother.

Ess will most likely be in therapy and on immunosuppressive drugs for the rest of her life to ensure her body doesn’t reject the new hands. “The medications drain your energy level,” says Ess, “and it affects my daily life in a sense that if anyone is sick, I can’t be around them because a common cold could turn into pneumonia.” But, to her, it is worth it. “I am just happy I can live on my own,” says Ess.

Ess is part of a committee with the United Network for Organ Sharing, a non-profit organization that manages the nation’s organ transplant system. The committee determines what qualities make a good candidate for hand transplantation and the bedside manners needed for beneficiaries. It is composed of all doctors and surgeons, except her. “I think it is important surgeons in the field understand that bedside manner is important because it is not just a normal surgery where you are saving lives, it is a surgery that increases the quality of life for a person,” says Ess.

She also supports checking the box on driver’s licenses for organ donation and enlists friends and Instagram followers to do so. A lot of her followers will send her photos of their licenses showing the box is checked. “That is a big deal for me because it means there are more organs out there for people who need it,” says Ess.

Her main support for the organ transplantation community comes from sharing her experience — from speaking to patients who receive transplants to speaking with donors, their families and medical professionals who arrange or perform transplantation — showing the Power2Save is in all of us.