In 1994, The Green family was on vacation in Italy when tragedy struck. Their son, Nicholas, was killed by highway robbers. His parents, Reg and Maggie, decided to donate his organs, which saved the lives of seven people and tripled organ donation in Italy. Today, Reg Green continues to speak out about their story and the recipients of his son’s organs. For additional background on this story, click here.

When I heard the news a few weeks ago that Andrea Mongiardo, a 37-year old from Rome, had died, the shock I felt was not only about his young age or that he had been so well the last time I had heard of him. It was that after surviving a series of heart operations as a boy – any one of which could have killed him –then, at 15 with almost certain death only a few months away, being rescued by a transplanted heart – and having survived all that,  he had finally succumbed. It seemed unnatural.  He had become a permanent fixture.

I feel this emotion particularly strongly because it was my son’s heart that saved Andrea 22 years ago. His name was Nicholas, he was seven years old and he was shot during an attempted carjacking while we were on a family vacation in Italy in 1994. His organs and corneas went to seven very sick people, one of whom was Andrea.

Surprisingly, perhaps, the decision to donate was not difficult to take. When we were told his brain had stopped working, I could see only bleakness. I felt that his life had just been thrown away. Never again would I feel his hand in mine as we went out for a walk together. Never again hear him say “Goodnight, Daddy.” 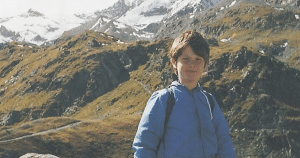 But when Maggie, my wife, in her thoughtful way said “Now that he has gone shouldn’t we donate his organs?” I could see for the first time a ray of light: someone could benefit from what had until then be only a senseless piece of brutality. I said ‘yes’ and that was that. And after all this time, five of the seven are still enjoying productive lives.

Nicholas’ heart, like this other organs, not only saved a life, it gave a new life. From being a nervous, gaunt tiny figure, aware every time he went to sleep that he might never wake up, Andrea regained his interest in life — including a passion for soccer — and got his first job. The lives of the others were similarly transformed: the two kidney patients were freed from the tyranny of dialysis machines to which they were hooked up for four hours three days a week in a cycle that kept them alive but robbed them of their childhood. The corneal recipients could see to play games with their children. The pancreas patient, ravaged by diabetes and completely dependent on others, got an apartment on her own for the first time in her life. And the 19-year old liver patient, who was in her final coma the day Nicholas died, bounced back to health, married and four years after the transplant had a baby whom she called Nicholas.

I saw that Nicholas in Italy a few weeks ago, when I went to Italy to build on the tripling (!) of organ donation rates since our Nicholas was killed, a tall handsome young man of 19, and, his mother told me, without a trace of the liver problems that have dogged the family for generations.

Maggie and I have met them all seven recipients, some of them several times, something that is not usually possible in most countries, including Italy, where the donor family and the recipients almost never meet or even know who the other one is.

In our case, secrecy was never possible because our story swept Italy like wildfire and all the recipients became known almost immediately. I am very glad of that.

Knowing each other has been therapeutic for both us and them. On our side, you can imagine what a consolation it is to see with our own eyes, those seven lives transformed. On their side, they show no sign of suffering from a problem that many recipients face: a sense of guilt that they are alive only because someone else died.

They know we would have done anything possible to have kept Nicholas alive. But he was dead and nothing we could do would change that. So they knew from our first meeting that what we wanted most for each of them was a long and happy life.

We have never thought that Nicholas lives on in any real sense in these seven different bodies. Those organs are theirs and they have had them three times as long as he did. And so when Andrea died it was not as though Nicholas was dying again: this time our sadness was not for Nicholas but for a friend who had lived a hard life and was leaving it much too soon.

Incidentally, he died of respiratory failure because of drug toxicity related to chemo-therapy treatment he received after diagnosis of lymphoma. His heart – Nicholas’ heart — kept doing its job to the very end.  I’m not surprised.

That sense of lost potential, even if not expressed that way, is presumably what energizes everyone who works in health care. And every now and then even those of us in other jobs are presented with a similar opportunity to rescue multiple people from an early death.

One of them is when a loved one suffers brain death. In those cases, I often wonder, what possible reason can there be for not seizing the moment to say ‘yes’?

Have a story to tell? Share your transplant story!