My name is Riley Tucker and I am sixteen years old. When I was seven years old I had been diagnosed with strep throat for nine consecutive months. By this time the doctors were starting to think there had to be some underlying cause. My family was recommended to go to Arkansas Children’s Hospital. After several tests, they found out that one kidney was too large and one was too small. 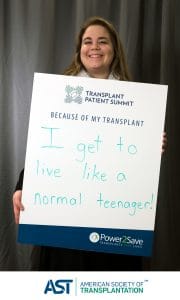 Though this was a problem, they held off on taking any action just yet. My doctors put me on several different kinds of medicine to try and keep the lifespan of my kidneys for as long as possible. This worked for about six years and then it was time to start looking into transplant. At this time, my kidneys were functioning at approximately  5%. My mom was the first potential match. The doctors ran tests for five months and the set date for my transplant was June 23, 2015. The long-awaited day came, and we were all jumping with joy. My mom and I were in two different hospitals.

The doctors soon realized that the kidney had an extra artery and would be very hard to transplant. They attempted the surgery anyway, and unfortunately, it failed. After this devastation, I would have to be put on dialysis. This included a very strict diet, biweekly shots, medicine, limitations, and being hooked to a machine every night. This was a really hard time for myself and my family, but we knew God was in control. Approximately six months later, we got a call from the hospital saying that there was a potential match available. We knew it was a long shot because there were three other people on the waiting list ahead of me, but anything could happen. When we arrived at the hospital, they said that all three in line before me had other issues at the time and could not be transplanted. This was my chance! We got all the blood matching tests done and waited. At 6:23 the transplant coordinator came in and said the kidney would be transplanted – we all burst into tears. At 7, I was ready for surgery.

Coming out of surgery everything was great, I did not even stay in the hospital a week. Today, it has been a year and nine months and everything is going well.