On December 21, 2018, 30-year-old Alin’s life changed forever. After having episodes of dyspnea for several days, she decided to go to the emergency room. She became critically ill during her first night in the hospital, and by the third day, she was told that she would likely need advanced heart failure therapy since her heart was failing. Alin was transferred to another hospital, where she was diagnosed with genetic dilated cardiomyopathy that was causing acute, decompensated heart failure. She was told she needed a heart transplant.

“It was a complete surprise,” Alin said. “I was a healthy, active 30-year-old up until days before I was told that I needed a heart transplant.”

It was a scary time for Alin, but she knew how dire the situation was since she was working in the medical field.

Alin often thought about transplantation and organ donation but in a very different light. She was worki 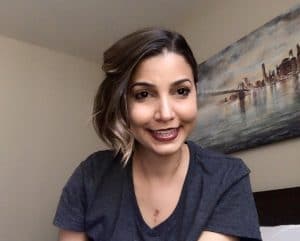 ng as an emergency room doctor, so she had experience communicating with organ procurement organizations.

“I knew how important organ transplantation was, but it was emphasized to another extent during my own hospitalization,” she said.

For Alin, waiting for a new heart felt like a roller coaster. She had a lot of ups and downs, both physically and mentally.

On January 15, 2019, the nurse who was taking care of Alin told her that she had a phone call. That was when she found that a heart was available.

Alin describes receiving “the call” as a very surreal experience. She immediately accepted the offer and called her family.

“I was ecstatic about the phone call, nervous for the surgery, but ultimately grateful for my donor. That’s the moment I decided that I needed to honor them in any way possible after my surgery,” Alin said.

Alin started a blog called A Change of Heart, which highlights her journey and helps to promote organ donation.

“The blog has helped me with processing my personal journey and all of the emotions that I had about it. Writing has helped me so much. More importantly, though, it’s helped raise awareness for organ donation. Through my blog, I was able to use it to fundraise for Donate Life America, and even got people to sign up to become organ donors because of it!”

Alin is just a few weeks post-transplant, so she still has some physical pain in her chest from the surgery itself.

“It is also hard to not be as active as I was before since I need to heal for a few more weeks before I can start jogging or doing moderately difficult exercises. The strong medications that I am on for the transplant also have side effects, like restlessness and insomnia. However, all of these will gradually improve with time, and I will be able to go back to a “more normal” life in a few months, all thanks to my donor,” Alin said.