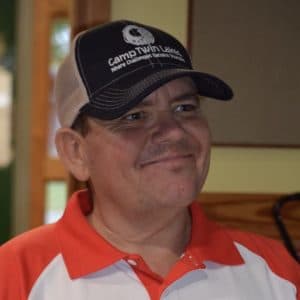 Matt has been dealing with kidney disease for his entire life, all 42 years of it. It has not knocked him down but made him stronger. Matt was born with Eagle-Barrett’s Syndrome. When he was born, he had about 10% function of his kidneys. The first ten years of his life, he considered it “normal.” He went to school, played with friends, and fought with his brother. Only in between all of that he went to the hospital periodically to run tests. Finally, at 10-years-old, he was told that his kidneys were in complete failure.

Just before his 11th birthday, Matt was put on the transplant list and started dialysis. He was on hemodialysis 4 hours a day, three days a week during the summer so he wouldn’t miss any school. His mother ended up donating her kidney to him on August 26, 1987. Matt went back to school later that year and actually ended up finishing 5th grade with the rest of his class.

There were many changes for Matt in middle school, just like most people. Unfortunately, his also included all the side effects from transplant medication like overgrowth of hair, moon face, and weight gain. He had a pretty tough three years, but still did what he could now that he was feeling healthier. He even ran for student council and became treasurer.

During his 8th grade year, Matt and his family moved from Coral Springs, Florida where he grew up to Alpharetta, Georgia where his life changed forever. The first few weeks in Georgia Matt ended up in the hospital, but that was just what happened every now and then. This visit was different. After going to an adult hospital in Miami for the past six years, Matt ended up at Children’s Healthcare of Atlanta. He realized he wasn’t the only kid with kidney problems or who received a transplant!

A few years after moving to Georgia Matt’s kidney began to fail, so before he had to go on dialysis again, his father donated a kidney on October 6, 1994. Matt was a senior in high school and was still able to graduate with his class. After graduating, Matt attended Berry College for seven years. It took seven years because four years after he started his second kidney failed, and he had to go back on hemodialysis for most of 1999. His brother eventually gave him a kidney on October 7, 1999. Matt ended up graduating from Berry in 2002.

In 2015 Matt had to go back on hemodialysis for 13 months. After a long wait, he received his fourth kidney transplant from an amazing angel donor on February 24, 2016. Since that last transplant, Matt has been planning Scooting4Donors, a cross country organ donor awareness campaign. Matt will be going from Miami, Florida to San Francisco, California on a mobility scooter to register as many people as he can to become organ donors. He begins his journey on April 1, 2019.