Meet Gary, 72 years young with a now fully functioning kidney he received from his daughter, Randene, at the age of 33. 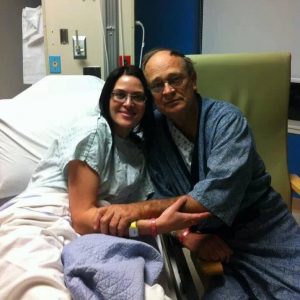 At the early age of 18 during a routine physical, Gary’s family doctor discovered excessive albumin in his urine. Concerned with kidney failure, over the next 7 or 8 years, he was subjected to follow up blood tests and a couple of kidney biopsies to try to determine prognosis.

A short time later at the age of 26, it was discovered that he had a very aggressive arthritic condition (ankylosing spondylitis) which was controlled and treated with a maximum strength steroid. His kidneys showed signs of minor failure and the nephrologist advised that the steroids were destroying the kidneys and advised him to stop taking them. The arthritic specialist contradicted that advice and said that if he stopped the steroids the arthritis would likely progress to a crippling and possible death threatening stage. The doctors discussed this situation together and their recommendation was to continue with the steroids as there would be a better chance to work with kidney failure (transplant) than the arthritic impact.

Unfortunately, this resulted in complete kidney failure by age 66.

Gary’s kidney function was reduced to less than 10%, requiring him to go on dialysis. He was able to do home daytime dialysis for about 2 months then graduated to nighttime dialysis for 6 months.  It was during this time that Randene noticed the quality of life for her dad deteriorating, and his hopes deteriorating as well.  Without her dad’s knowledge, Randene started researching the possibility of becoming a living donor.  She knew it would be hard to convince her dad to accept this offer, but she couldn’t bear watching his life become hours spent doing dialysis, taking much time away from his 5 grandchildren.

Randene approached her dad shortly after with the offer to be his donor. He insisted she was too young to have such an invasive surgery and that the later health implications were too unknown, and declined her offer.  Other family members were tested, including Gary’s sister, but in the meantime, Randene asked that she be allowed to go for preliminary testing as well.  When no matches were found, Randene insisted she continue testing and presented him with many facts on the health of living kidney donors.  Each test was checked off the list and each time, Randene’s testing progressed until it was deemed she was a perfect match.

On March 21, 2012, Randene donated her left kidney and hours later, Gary woke up from surgery feeling 100% and declaring he hadn’t felt this great for years.  The doctors were completely surprised at the success, expecting function to improve over a few weeks to a creatine level of around 150. To their surprise the creatine level was down to 98 immediately after the operation which was significantly better than when he even had two good functioning kidneys.

To this day, both Gary and Randene are in good health and everything is going better than expected.  “I would do it over again in a heartbeat,” Randene says. “My dad has always been one of my biggest supporters and to be able to do this for him, I felt like the one being given a gift.  There are 7 grandkids who need their Grumpa and now have many more years with him.  That’s the biggest gift we could have received.”

“We both continue to advocate for all organ donation and want to share our story if it means inspiring others to become a living donor.  The connection is stronger than ever between my dad and I, and we are both so grateful for the incredible staff of nurses and doctors that made this possible.”