My name is Luke, I am 24 years old and I live in Milford, Connecticut. At 10 weeks old I was diagnosed with Biliary Atresia and I underwent my first operation of many, called a Kasai. Biliary Atresia is a rare liver disease where the bile ducts are blocked and the liver cannot filter out toxins properly, which can be life-threatening. This disease is only found in infants, not adults. Both of my transplants were done at the University of Nebraska Medical Center in Omaha, Nebraska. 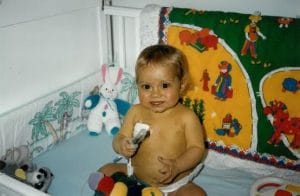 I received my first transplant on 1/14/1997 at 11 months old and I spent exactly 1 year in the hospital. I received my second transplant on 4/16/1998 at 26 months old and I only spent 10 days in the hospital. I was able to return home in 40 days. During my first transplant I developed PTLPD which is similar to lymphoma and I have 3 lesions in my brain because of it. These lesions cause me to have seizures. When I was finally able to be outpatient for both transplants, the Ronald McDonald house allowed me to stay there since it was close enough to the hospital if something were to go wrong.
Currently, I am a graduate student at the University of New Haven majoring in Criminal Justice. Upon graduation, I would like to be either probation or parole officer. I graduate next spring. I also have an adorable 4-year-old niece, with another nephew/niece on the way.
Growing up I was very self-conscious of what people would think of me because my scar was and is big and easily noticeable to others. In the summer, the only time I would have my shirt off is if I went swimming. Once I was done swimming I immediately put my shirt back on because I did not like how people looked at me and my scar. 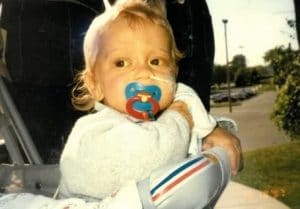 From elementary school through high school, I did not have many friends because of my self-consciousness and mainly kept to myself. I played sports and was in the band but that was the farthest I would go as far as socializing with other people.
As I went through high school and into college, I came to realize that my scar does not define who I am, it is only part of me. It was during this time where I stopped being self-conscious and my scar would often be a conversation starter. I want to spread awareness and the importance of organ donation, and my scar allows me to naturally do so.
At times I would meet people who also had large noticeable scars and we had an instant connection to each other. I am still in contact with most that I have met. 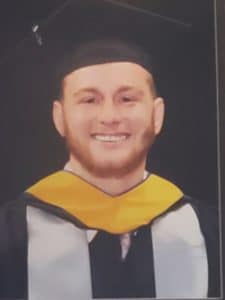 Both of my donors wanted to remain anonymous so none of my family or I know who they are. I do not really celebrate my anniversaries, but sometimes I will watch happy videos with my family of when I was a baby at the Ronald McDonald house since the rest of the videos are of me in the hospital which can be sad, but also important because they visually show what I went through.
For those like me who have either had a transplant and/or other life-threatening illnesses, such as cancer and have a scar because of the surgeries they had, I tell them what I realized in high school and into college. They should not be ashamed or self-conscious of their scar because that is the reason why they are alive today. Every day I wake up my scar is a daily reminder of why I am still living after receiving a second and third chance at life. Like my scar is for me, their scar can be a conversation starter with others.
Life should never be taken for granted because we do not know what the future will be like. Reflect on the past, focus on the present, and prepare for the future as best as you can.