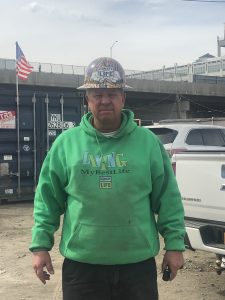 Mike had never thought about organ donation before – and didn’t even realize there is a need for organs. However, that all changed when he attended a family event and learned that his cousin, Brenda, needed a kidney transplant.

Since Brenda was a distant cousin, Mike introduced himself, and after they began talking, he immediately knew he wanted to become her living donor.

After starting the process, they discovered they were not a match. However, the hospital brought up the possibility of a kidney paired exchange – which is an option that allows living donor kidneys to be swapped, so each recipient receives a compatible kidney transplant.

In December 2015, Brenda received her kidney from a donor in Minnesota through the exchange, and Mike’s kidney went to another kidney transplant candidate in need.

A year later, the transplant social worker gave Mike the contact information of his recipient, Michelle, who also lived in New York City.

Michelle and her husband were shocked when Mike called. All that time, they were living in the same city but had no idea. When they met up, they took pictures together at Bryant Park and Rockefeller Center to commemorate the day. 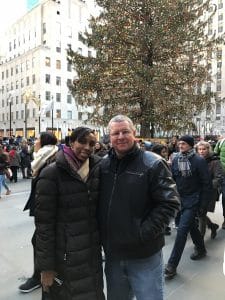 Sadly, Brenda passed away a year and a half after her transplant due to anti-rejection medications and lupus complications.

Despite his cousin’s passing, Mike is glad he donated. Not only did it save Michelle’s life, but it also saved his life in a roundabout way.

“After kidney donation, I had severe butterflies for months. I found myself a cardiologist who discovered I had 95% blockage just three months after surgery. If I hadn’t donated, I would have never had the butterfly feeling and would have never of gone to the doctor,” Mike said.

Mike is healthy now, and he and Michelle are still friends. Before 2015, he had no knowledge of transplantation, organ donation, or kidney disease, but he is now a huge advocate.

“I advocate for being a donor daily,” he said, “on my license plate, sweatshirt, hardhat, and through conversations. I hope that this story reaches someone who knows nothing of kidney disease or organ donation and inspires them.”