Jason Kilderry was an avid and passionate competitive runner in high school, but a polycystic kidney disease (PKD) diagnosis his freshman year of college brought an end to his racing days. “The most difficult part of the struggle with PKD was the impact it had on my abilities as an athlete,” says Jason. As the PKD progressed, it affected many aspects of his health that left him tired, fatigued, and more susceptible injury, and he failed to reach his performance goals. “My racing days were all but over,” he says. But today, years after his initial diagnosis and treatment, Jason is back in the game, using his athletic prowess and knowledge of exercise science to train clients at ETA Coach, his endurance coaching company, and also serves as a health consultant for all aspects of his clients’ health and wellness.

After his diagnosis with PKD, Jason unde 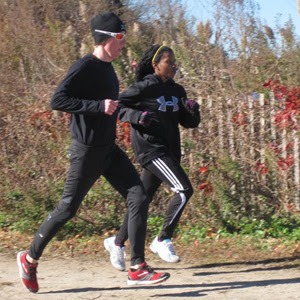 rwent more than 10 surgical procedures and spent an extended amount of time on dialysis before one of his college teammates donated a kidney to him. During his many hospital stays, he would often become bored and wander around the hospital with his IV. “I’ve always been an active person,” he says. “I guess being in the hospital was no different. I was moving when I could.”

On one of his walks, Jason encountered a man preparing to leave the hospital after receiving his discharge paperwork. The man had been hospitalized for cardiovascular issues, and as he was leaving, he told his nurse that he was off to McDonald’s. The nurse expressed concern over his choice in meals so soon after experiencing cardiovascular issues, but the patient assured her that he was eating healthy – he planned to order a Filet-O-Fish. That moments served as an impetus for Jason’s career as both a coach and a recognized speaker in the field of health and wellness. “I realized that people were experiencing preventable health issues that were caused by lifestyle choices, and they didn’t even know it,” says Jason. Among them, high blood pressure and diabetes that can lead to kidney failure – which Jason had experienced as a result of his PKD. “I’ve experienced kidney failure and dialysis, I lived it,” says Jason. “I thought, I can help people avoid this by educating them.”

His goal is to change the way people think about their lifestyles. “Poor health choices result in serious complications. I want to teach as many people as I possibly can, and I use my story to do that,” says Jason.

Today Jason is a USA Level 1 triathlon. He holds a degree in exercise science, is a certified strength and conditioning specialist and is currently pursuing two master’s degrees. He says his greatest passion is helping his athletes achieve their dreams. “People might think they can’t do it,” he says of new athletes or those returning after a long hiatus from training. “I’ve been there. I’ve started over at square one and know what they’re thinking, but I assure them that they can do it. They can at least try.”