A Boulder woman received a kidney donation from a complete stranger who said it was the right thing to do.

Nate Toci was driving by a rotating billboard along Interstate 25 in Monument on his way home from work one day when he saw the sign seeking a kidney donor for Kelsey.

“It’s a digital sign and it’s on for eight seconds,” Debbie Crider said. “Eight seconds and then it goes away and the next one comes up.”

Toci decided to step up.

Tests later showed he was the perfect kidney match for Crider.

The Criders said that’s the mentality of a soldier. Toci is in the U.S. Army Reserves.

“I think that’s just the American mentality, you know,” Toci said. “Not just doing something, [but] asking what else you can do for somebody else.”

Crider was diagnosed with kidney disease when she was 17. The now-26-year-old cat and rock music lover had undergone three transplants over the years, with another rejection last year.

Toci is her fourth kidney donor, and the youngest. The pair underwent surgery two days after his 21st birthday. 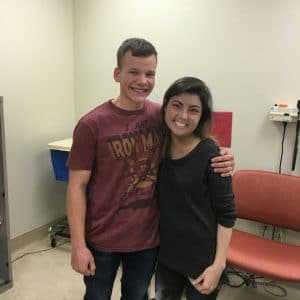 “And our coordinators asked if we wanted to meet each other, and I’m like, ‘Of course I want to see the person giving me a kidney,'” Crider said.

It was during their recovery time at University of Colorado Hospital that they realized they had more in common than just blood type.

“We’ve had movie days, like because we’re really into ‘Lord of the Rings’ and the ‘Hobbit,’” Crider said.

“You really don’t find many people that love the ‘Lord of the Rings’ like Kelsey does,” Toci added.

“Nate is the kind of guy that will just go out and give himself to other people,” Crider said.

He’s a hero with one less kidney, but a whole lot more heart.

“It gave me such good hopes for the future, not just for my daughter but for the country,” Debbie Crider said. “It’s like yeah, there are good people out there.”

Kelsey Crider had some initial complications, but they joke that Toci gave her a “bionic kidney.”

The pair wanted to share their story in hopes of encouraging others to look into living kidney donation.