Home > Blog > Do You Realize that You’re a Champion in Their Eyes?

Bob Stewart took on a daunting task in 2015. After being tested as a donor for his wife Michelle, he was found to be an incompatible blood type. After many others stepped forward and were either denied or incompatible, Bob knew he had to think outside the box.

On a quiet Friday afternoon, my phone began ringing off the hook. As someone who works at a donor transplant office, Fridays are usually busy but this was unusual. In the midst of the rapid calls, I spoke to a man who had the answer to the busy phone line mystery.

“Are you getting a lot of calls?” he inquired.

“Yes, I am.” I answered suspiciously. 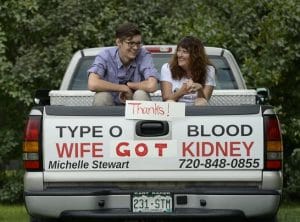 “Oh good, I saw a picture of this truck on my way to work. I took a picture and posted it on Reddit.com.” he said matter-of-factly, but relieved that his efforts weren’t in vain. “I was hoping for a good reaction.”

A good reaction is an understatement. Affectionately dubbed “The Truck Picture,” this Reddit post went viral over that weekend. It spawned hundreds of calls and even caught the eye of the national news. Bob’s champion efforts worked. Between his truck signs, his work with a nonprofit kidney organization and his resilience, his wife was transplanted by an anonymous donor.

This story had a happy ending for Bob and his family. However, he didn’t feel as if this was the end. He graciously offered the back of his truck to another recipient that needed a transplant. That patient was successfully transplanted as well! Bob wasn’t finished; he wanted to use his tailgate to help someone else who could use a champion.

Bob has spoken on the Donor Champion panel, giving insight about what is to be a Donor Champion. He has spawned many “copy cats” that use his car decal idea and it has not slowed down yet. The University of Colorado Health Donor Champion Class gives potential Donor Champions like Bob the know-how, the education and, more importantly, the support to take on such a task. The kidney transplant department hopes to inspire Donor Champions to be educated and advocate for their loved ones. It is only an added bonus when a champion develops a passion to advocate for living donation.

Bob is a Champion in the many eyes that see the back of his truck!