To most people — to almost all people — the idea of having someone else’s heart or liver, kidney, lungs or pancreas inside them is too outlandish to think about. But, in fact, all around us there are ordinary men, women, and children who one day have been, or will be, told that unless a new organ becomes available they cannot expect to live much longer. At that moment, they realize,  perhaps for the first time,  that for them to be saved someone else will have to die. 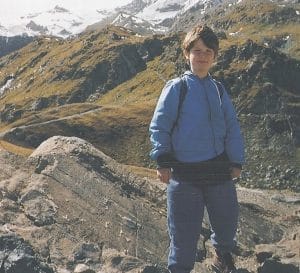 The last photo of Nicholas Green, the seven-year-old son of Reg and Maggie Green. It was taken in Switzerland in 1994 while the family was on its way to a vacation in Italy where Nicholas was shot in an attempted carjacking and his organs and corneas donated to seven very sick people, four of them teenagers.

Some of these people have been sick all their lives, never knowing a normal day, going in and out of hospitals and aware that the end could come at any time. Others, including some world-class athletes, were seemingly in perfect health until they were struck down without warning by a virus.

Still, others have lives that, though not threatened, are miserably constricted or in chronic pain:  blind, perhaps, or suffering excruciatingly from burns or with bent spines or unable to walk or pick up their children.

Into their world comes transplantation like a lifeline, some would say a miracle. It is not simply the best cure. For most of them, it is the only cure. And because of the rapid advances in medical science, more and more people can benefit from it – sicker people, older people and people with more complex problems.

It is the most egalitarian of cures, leaping over all the normal social barriers. White men are walking around with black men’s hearts inside them and vice versa. Asians are breathing through Hispanic lungs and vice versa. And — dare I say it? — Democrats see the world through Republican corneas and vice versa.

Transplantation is not a cure-all. As with any surgical procedure, complications of all sorts are possible, the powerful medications that recipients have to take so the body will not reject the new organ can have serious side effects and patients, who were sick enough to get to the top of the long waiting lists, have often developed other diseases that undermine their health, regardless of the revivifying effect of the new organ.

Even so, the results are astounding. However many times it happens, an inert organ, that has been taken from someone already dead, and springs suddenly into life in another dying body, still seems to most of us to have more in common with science fiction than mainstream medicine.

Given that all these people were terminally ill, that many were close to death at the time of their operation and that, over the years, some proportion of them will die from unrelated causes, the immense distance transplantation has come speaks for itself.

The waiting lists are the most obvious indicator of the distance it has still to go. The people on those lists live perpetually on the edge, always aware of a winner-takes-all race between a wasting disease and a cure over which they have absolutely no control. Every day 20 of them die. A total of 115,000  people are now waiting for an organ, compared with fewer than 20,000 thirty years ago.

But even then, seen from another angle, those ever-lengthening lists are a measure of the progress of transplantation. As techniques have improved across the board, demand for the procedure has skyrocketed, moving it in a few decades from experimental to common therapy.  The limiting factor, always, is the shortage of donated organs.

When all goes well patients who couldn’t walk across the room without having to stop for breath are out of the hospital in a few days, back at work soon after, playing sports again. Athletes return to compete in the Olympics, win NBA championships and run marathons.

Generally, their whole life changes. They become rejuvenated, take up pursuits they have never had the energy for, have babies that were previously not even a possibility, climb mountains, get college degrees and travel to faraway places. They relish even the most mundane routines – shopping, driving the car to work, being alone without worrying about a catastrophe.

These people come from all walks of life, all temperaments, and all philosophies. Some are deeply religious, seeing the hand of God in their own experience; some are intermittent worshippers, some firm non-believers – in fact, a cross-section of society.

A common thread, however, brings them all together. I am writing this article because my seven-year-old son, Nicholas, was shot in an attempted carjacking while we were on vacation in Italy twenty-four years ago. A journalist who interviewed his seven recipients told us: “They are all very thankful to your wife and you and they think of you every day. But they speak of Nicholas in terms that I can only describe as reverence.” So it is with recipients all over the world: they have their donor’s photo in their wallet, send flowers to the family on birthdays, light candles and determine to be worthy of the gift they received.

A large majority of donors never met the recipient and never will. They died and, in dying, their families, often acting on what their loved one had told them months or years before, agreed to make their gift without any knowledge of where it would go.

These donor families are as diverse as recipients. Some had scarcely heard of transplantation until suddenly faced with the death of one of their members. Others had talked about it freely. Some came to the decision agonizingly. For others it was so obvious they didn’t even debate it. But all, at the moment when they were most vulnerable, instead of turning inward in bitterness and despair, set aside their grief long enough to help people they could only dimly imagine.

Some donors didn’t die. Nowadays, an increasing number are living donors, who undergo a major and otherwise completely unnecessary operation, to give a kidney or part of their liver or lung to help someone in need. Mostly that someone is a close relative and they regard the donation as a privilege. But at times it is a casual acquaintance or even a total stranger. When asked why they would put themselves at risk they typically shrug and say simply: “They needed it more than I did.”

Despite all these differences, the power of transplantation has produced a response as strikingly uniform as that of recipients. Among all the hundreds of donor families I have met, I can scarcely remember one who regretted the decision. Almost all say it was the one good thing to come out of a terrible time.

It is those who didn’t donate who more often have regrets. At meetings about organ donation, people will come up, with tears in their eyes, to say, “I wish I’d done that.” Five, ten, sometimes twenty years earlier a family member had suffered brain death. No one had educated them about donating or they were too upset to think about it or at the time the idea frightened them. Now they feel that somehow they let that loved one down.

Not that donation takes away the loneliness. More often than I like to remember, I will meet a young couple who say quietly something like this: “A few months ago our daughter’s school had a presentation on transplantation. She told us that if anything happened to her she’d want to be a donor.” They pause to pluck up courage and my heart sinks, knowing what is coming. “A few weeks later,” they add, “she was killed coming home from school on her bicycle. We didn’t hesitate.”

People like that speak of the peace of mind the decision has brought them and the way it has helped them heal. “It’s given a meaning to her death,” they say. “It produced something good instead of everything being a waste.”

In the absence of any previous discussion, a family in the waiting room of a trauma hospital is often bewildered. The circumstances of sudden death are always searing but, in addition, family opinion may be divided, some members who need to be consulted may be away, emotions can be running out of control.

Misconceptions are commonplace. Some people are convinced that if they sign a donor card the doctors will not try as hard to save them.  Some think their church is against transplantation.  Others say of someone who has just died, “I don’t want her to be hurt anymore.”

Everything is working against calm thought. A mother may have to call her husband at work to tell him their child was hit by a car. A father may have to tell his children their mother is not coming home. Making a major, irrevocable decision there and then about something they have never seriously thought about is too much for many people. They say ‘no’ and often regret it for the rest of their lives.

The need is urgent because the potential supply is so limited. In the overwhelming majority of deaths, where the heart stops beating, the organs deteriorate too quickly to be transplanted. Most donated organs come from the small number of people, whose brain has stopped working and are truly dead, but who are on a ventilator that can keep their organs viable for a short time. By contrast, almost anyone can donate tissue – corneas to restore sight, skin to cure burns, bone to straighten spines, ligaments so that invalids can walk again.

A donation produces on average three or four organs, saving three or four families from devastation, in addition to tissue that can help up to 50 people. Most people in their whole lives will never again have as great an opportunity to change the world for the better as they have at that moment. With that much on the line, I often wonder what possible debate there can be about what is the right thing to do.

But there is something about organ donation beyond even this. A few days before Nicholas was killed, while we were on our way to Italy, we played a game with him in which he was a Roman general returning home after many years on the frontiers — the Scottish border, Gaul, the Alps, all places he had been. When you get back to Rome, you’ll be a hero, we said, the whole world will know your name, you’ll be given a gold medal. It was just a game. But it all came true — with this difference,  that Nicholas did not conquer by the force of arms but, like all organ donors, by the power of love — and that, of course, is much stronger.

This article, slightly modified, is from Reg Green’s book “The Gift that Heals,” published jointly by the United Network for Organ Sharing and the Nicholas Green Foundation (www.nicholasgreen.org)