Rick and his wife, Jackie, have always been there for each other. They have been married 36 years and have always taken care of one another. In 2015, Rick gave his wife a Valentine’s Day Gift that will be difficult to top – he became her living kidney donor and saved her life. 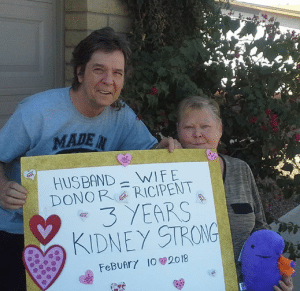 ll started in 2012 when Jackie began to feel sluggish. After several visits to the doctor, they found out Jackie was in kidney failure. After receiving this news, Jackie began dialysis.

Thankfully, Rick found out that he was a match to donate his kidney. However, right before the surgery, he was told that it would be too risky.

Knowing that his wife’s life was on the line, he pleaded with the doctors to try the surgery. Finally, he was given the green light to go forward with the living donation. The entire family was in the waiting room awaiting the results. When they found out that the surgery would happen, they all cheered.

Post-transplant, Jackie has been faced with several issues. Transplant recipients are required to take immunosuppressive medications, which prevents organ rejection. However, these drugs often come with harsh side effects, including infections, cancers, and other complications. Jackie has had several infections and a lot of issues with skin cancer.

“It has been a roller coaster,” Rick said.

Jackie faced reconstructive surgery on her lip due to cancer and recently had to have her foot amputated.

There have been countless surgeries, but Rick’s kidney always makes a recovery. On February 10, the couple celebrated their third kidney anniversary. This has made an unbreakable bond for the couple. Even after being married over 30 years, they still managed to become closer.

Last year, Rick was in a bad car accident. Jackie stepped right in to help him recover. They are a couple that is truly always there for each other.