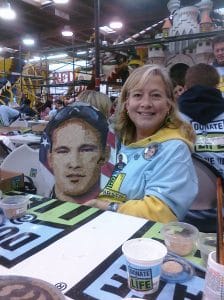 My greatest gain I count as a loss. As the sister AND mother of organ donors, I can make this statement twice. When I was barely fifteen years old, my eleven-year-old brother J.T. was hit by a car and declared brain dead ten days later. As a family, we were approached by the doctors to donate his organs. Believing that if my brother would have been able to make this decision himself, we agreed. He was that kind of a kid; selfless, kind and generous. Before being removed from life support, his eyes and kidneys were donated to strangers. This was 1982 when organ donation was a new concept. In Minnesota, where I lived then, hospitals did not even begin keeping records until 1986. For this reason, my family is considered pioneers in the organ donation world.

When I became a mother, I made sure my son Ben knew all about his uncle J.T. and the selfless donations he was able to make to save and help the lives of strangers. The topic of organ donation was never taboo in our house. It was something we talked about and supported.

Fast forward twenty-seven years when I found myself facing the same circumstance as my parents when 21-year-old Ben (my only child) was shot by a sniper on his third deployment as a U.S. Army Ranger. He had survived an overseas surgery and made it back to Walter Reed Army Medical Center in Washington DC, but the trauma to his body would prove to be too much. With an overwhelming sense of deja vu, my mother and I sat in awe as the doctors told us that Ben was brain dead. They asked me to consider organ donation. Because Ben was 21, the decision would be his if we could find documentation of his wishes. We did. In a living will he completed before his deployment, there was a question that asked, “Do you wish to be an organ donor?” Ben answered, “Yes.” The next question asked, “Which ones?” Ben wrote, “Any that are needed?” Eight days after being wounded half-way across the world, Ben’s organs, bone, skin, and tissue were donated, saving and
enhancing lives. 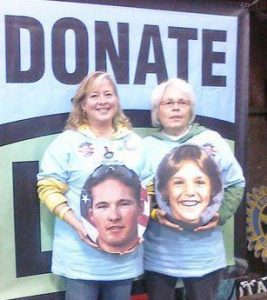 How do the deaths of my brother and my only son count as a gain? They both saved the lives of complete strangers when theirs ended. As a young teen, I experienced firsthand what it feels like to have joy overshadow sorrow when my family received a thank you letter from one of the recipients of my brother’s kidneys. The gift of life from a little boy! By a miraculous circumstance, I designated the recipient of my son’s heart and have been able to put my hand on her chest and feel Ben marching on. I have also met the recipients of his kidneys and liver and remain connected to all of them almost nine years later. Ben saved six of his brothers in arms on the battlefield and then four more directly with his heart, kidneys, and liver. His bone, skin, and tissue enhanced the lives of 50 more. In life and death, my son is a hero.

The gifts of life that J.T. and Ben gave have taught me what it means to be selfless. The joy their donations have given to families they would never know has made me the recipient of incredible gratitude and allowed new generations to carry on.

In Max Lucado’s book called “Outlive your life”, he says, “We are invited by a great God to do great works. He invites us to outlive our lives, not just in Heaven, but here on earth.” He adds, “Here’s a salute to a long life, goodness that outlives the grave and love that outlasts the final breath. May you live in such a way that your death is just the beginning of your life.”

When you or your loved one becomes an organ donor, their death is just the beginning for someone else and that, to me, is a beautiful ending.