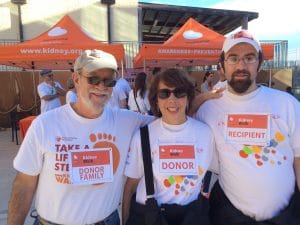 To say that I was an unlikely kidney donor is an understatement. If my high school yearbook had had a “Least Likely to Be a Living Kidney Donor” category, that would have been me. I’ve always been a wimp: I faint at flu shots, IVs, blood tests. And yet, in June 2006, I donated a kidney to my son, Paul. The reason is simple: his kidneys were failing and I was the only willing one who could. Wimp or not, of course, I’d do it.

He was in his early 20s when he developed ESRD. He’d been diagnosed with iGa nephropathy when he was in college, following a lingering strep infection—not uncommon. Yeah, no hereditary disease, no diabetes or high blood pressure.  He wasn’t obese. He just had rotten luck. So, in other words, what happened to Paul—and to our family—could happen to anyone.

He was on dialysis for nearly 2 years before all the insurance headaches and testing and delays could be sorted out. This was before the Affordable Care Act, so he was no longer on our health insurance once he’d graduated from college.

Thanks to the gentle, understanding support of the transplant team at the University of North Carolina (UNC) Hospitals in Chapel Hill, this wimp made it through the testing and evaluation. My transplant nurse coordinator virtually held my hand throughout the testing and prescribed lidocaine so I could numb my arm before the blood draws. As at most transplant centers, I had a separate team of professionals from my son’s; they never made me feel pressured or foolish or ashamed of worrying about dizziness and queasiness at such a critical time.

When we finally overcame all the hurdles and the surgery was scheduled, I was thrilled—and, yes, panicky. I started focusing on my pounding heart, on my breathing. Soon I was imagining I might be having heart palpitations and trouble breathing. I called my nurse coordinator, and she promised to check with the doctors. She called me back, saying the surgeons assured her that my heart and lung function were fine and I had nothing to worry about.

Did I want to talk to the psychologist? Sure, why not. When the psychologist heard my concerns, she stunned me by asking if I might like to postpone the surgery.  OMG, they think I’m having second thoughts! Nothing could have been further from the truth. “Trust me,” I told her, “I’d be the same if I were having my tonsils out.”

We went ahead with the surgery, and it was so much easier than I feared and even more gratifying than I expected that I’ve become a living donation advocate and am writing a book on the subject (with a kidney recipient). At nearly 12 years since his transplant, my son is doing really well and so am I. So, yes, I’d do it again in a heartbeat. That’s apart from the obvious enormous benefits to my son. Knowing that you’ve had a profound impact on someone’s life—on any human being’s—is a helluva feeling.  Please tell everyone you know that even a wimp can be a living donor.

Interested in becoming a live donor? Check out the Live Donor Toolkit.