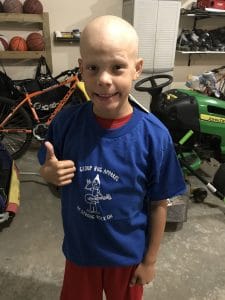 In April 2017, when Brock was just turning 11 years old, he was diagnosed with stage 4 hepatoblastoma, a tumor that starts in the liver. By July 2017, he needed a liver transplant and was added to the waiting list.

All of this came as a shock to Brock and his family. Brock appeared to be completely healthy; he was an athlete and played competitive hockey. It all started when his mother, Julie, took him to the dietitian for protein shakes.

Soon after, life would change. Brock was diagnosed with stage 4 cancer. The news was devastating. Brock quickly started chemo, and his parents were hopeful that it would solve the problem. It was a hard pill to swallow when the chemo didn’t work, especially after Brock had endured all the harsh side effects. 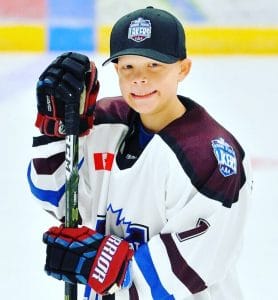 In July, they went to a consultation at the hospital. It was a Friday when they were called, and they were instructed to bring Brock in on Sunday.

Shocked at the urgency, Julie asked who was calling, and found out it was the transplant team.

“Transplant wasn’t even in our vocabulary,” Julie explained. “Two days later, Brock was added to the waiting list for a liver transplant.”

The family was thrown into a whole new world – again. They were still learning to cope with the cancer diagnosis, and now they were learning about an entire new medical issue – transplantation. Julie inquired about being a living donor, but it was not an option in Brock’s case. It was difficult, as they were at the mercy of a phone call.

They received one false alarm for a liver, but when “the call” came, as a mother, Julie knew it was what they had been waiting for. 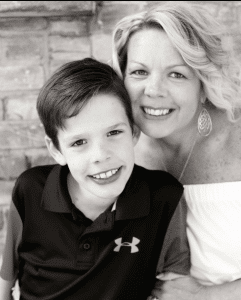 They received the phone call at 7:30 am and were told to be at the hospital by noon.

Brock had never complained through the journey, but he had been convinced that he would not have the transplant. When the call came, he was terrified and refused to get into the car.

However, when he got to the hospital, his whole mindset changed. He was determined to get the surgery done and have a fast recovery. Brock stood by this goal and ended up setting the record for the quickest discharge after transplant at SickKids in Toronto.

Today, Brock plays competitive hockey and baseball. He is doing great post-transplant and does everything he can with his family to raise awareness about organ donation.

“It’s our mission to give back,” Julie said. “Last year, we knew where we were going to bury him, and transplant wasn’t even on our minds. This year, we attended the Canadian Transplant Games, and Brock won five medals.”

Julie encourages caregivers to stay positive. “It’s all about your mindset. You’re going to have days that you think you can’t cope anymore,” she said.

“You have to find a new normal. You have to seek out as much support as you can and take time for yourself.”