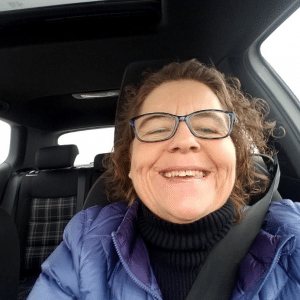 Julie knows the importance of making “One Transplant for Life” a reality – she is the recipient of three kidney transplants.

Julie has battled kidney disease her entire life. Her parents found out when she was just six weeks old, and she lived with only 25% kidney function until she was 11 years old.

Thankfully, Julie was never on dialysis as a child. Her father was approved as a living donor match and donated his kidney to Julie at age 11.

Julie remembers her kidney transplant having a significant impact on her childhood. She was unable to eat the same foods as her peers and spent a lot of time at the doctors. In addition, she was unable to participate in sports or other activities.

“Going to school was exhausting enough,” Julie said. “Additional activities would have been too much.”

Her transplant was a significant burden on her parents, but she urges families to make the most of each day.

“Try to take it day by day. You have to enjoy the little things,” Julie said, when asked what advice she has for parents of pediatric transplant recipients.

“Don’t forget about your other children,” she said, thinking of her brother. “It is human nature to pay attention to the sick child, but all kids need attention.”

While waiting for a transplant is difficult, Julie said she was thankful that dialysis was keeping her alive and that’s she was listed on the waiting list. She received her second kidney transplant from a deceased donor in 1997.

Her second kidney transplant lasted eight years.  Dealing with rejection was especially difficult this time around. She had always been so careful with medications, but she had to start over again.

Julie was on hemodialysis for eight years waiting for her third kidney transplant.

In May 2017, she received her transplant from a deceased donor. However, the cost of her medications forced her to move in with her father.

“It is sad how many people question receiving an organ transplant because of the cost of medication,” she said.

Post-transplant, Julie is doing great. She does what she can to raise awareness and would like to start a support group to help others.