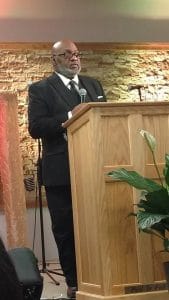 In April 2013, during a visit with my endocrinologist, I found out that I only had 35% kidney function. She referred me to a nephrologist. My nephrologist informed me of certain foods I needed to avoid so that I could prolong going on dialysis as long as possible. While I had to wait this thing out, I noticed that I was gradually picking up weight. By November 2013, I walked into my nephrologist’s office in sweatpants, a t-shirt, flip-flops, and heavy breathing. I was at 380 lbs and I could barely breathe. My wife told the nephrologist that she couldn’t bare to watch me like this and at that moment is when he scheduled me for surgery to have a peritoneal catheter placed in my abdominal area.

On December 1, 2013, I began doing Peritoneal Dialysis. During the month of December 2013, I lost 57 lbs just in fluid weight. Yet, because I was still obese, my prescription had to be changed for my dialysis because it wasn’t cleaning my body as it should have. At that time, I was doing just 3 exchanges during the night for a total of 8.0 hours. My nephrologist changed it to add what was known as 2 mid-day exchanges. Now my dialysis schedule began with my first exchange at 10 am, 3 pm, and 3 exchanges at night for 8.5 hours. So, I did 5 exchanges a day, totaling 10.5 hours of dialysis a day, for 7 days a week. That equates to 73.5 hours of dialysis a week, 294 hours a month and 3,528 hours a year for 3.5 years. 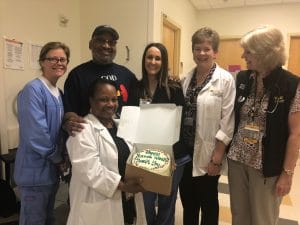 In February 2016, I was placed on the Transplant waiting list at VCU/MCV Hume-Lee Transplant Center. I received a call for a kidney on May 20, 2016. Because of my body size and current weight at that time, and the size of the deceased donor kidney, I was going to receive two kidneys because the donor’s kidneys were small. So, the two kidneys would function as one. 15 minutes before the surgery, the surgeon came in and told me that one kidney was working while the other kidney was not working. At that notice, the surgery was terminated. It was 11 months later April 20, 2017, at 11:45 pm that I received a call concerning a kidney for me. What was ironic about this call is that approximately 1 month prior, I was diagnosed with hypercalcemia, sarcoidosis, hyperparathyroidism and possibly lung and/or bone cancer. The same day I went to see a rheumatologist is the same day I received the call for the kidney. On April 21, 2017, I received my new kidney. 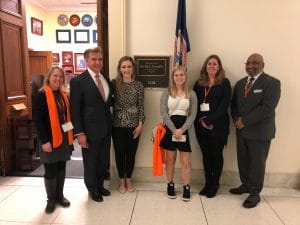 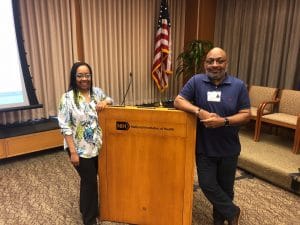 Because of all of the trials that I went through, I knew I needed to make a lifestyle change. I lost my kidney function before due to a combination of uncontrollable diabetes and hypertension. I joined a weight loss group at my hospital at the recommendation of my transplant clinic. My weight loss clinic put me on the Keto diet so that I could better control my diabetes and change my eating habits to something healthier. I began the Keto diet on February 16, 2018, and as of this writing, I have lost a total of 49.6 lbs. My goal is to lose 37 more pounds. I am no longer on any insulin’s. Prior to this diet, I was on 2 different types of insulin and 4 hypertension medications. I have been taken off of 2 of my hypertension medications. What I was told during this journey rings true to every adverse situation that has come into my life…Respect the Process! Though the process can be painful and uncomfortable at times, it is well worth looking at the finished product afterward. My labs are good and I feel good! I am trying to keep this kidney functioning for the rest of my life!