Damian had never thought about living organ donation before. That was until one of his best friends needed a liver transplant. 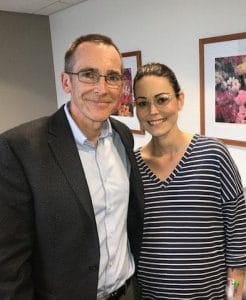 Damian with Breana, the recipient of his liver.

A few friends from high school volunteered to be her donor but ultimately fell through. A family member of his friend asked Damian to post on social media about her need for a liver donor.

After posting, he realized that he never volunteered to get tested. In August 2017, Damian found out that he was a match. However, she was no longer eligible for transplant.

Damian decided that he still wanted to become a living donor – even if it wasn’t for his friend.

He volunteered to be an altruistic liver donor. In August 2018, he was matched with a woman in need of a liver donor. Since Damian is a teacher, he asked to defer the donation until December.

“I didn’t know who the recipient was. They just told me she was a 29-year-old female who needed a liver,” Damian said. 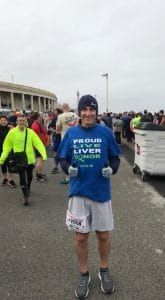 Damian’s first marathon post-surgery – the Blackpool Marathon in the UK.

At that point, Damian had no idea if he would ever meet the recipient of his liver.  He had already committed to the donation and was at peace with the fact that a meet may never happen.

However, over the next couple of months, after the two mutually agreed, an idea evolved that the two should meet.

Damian met the recipient of his liver, Breana, two months after the donation. The heartwarming meeting was aired on the Today Show.

Damian and Breana keep in touch. Damian visited her during her recovery; the two share a special bond.

“It is hard to put into words,” Damian explained. “It is a unique, rare relationship. It is almost like we are family. There is no doubt that this connection will remain for the rest of our lives.”

It has been four months since the donation. Damian recently completed a marathon in England and feels great. 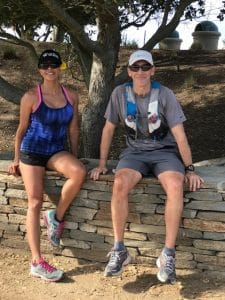 Damian and his friend, Xochilt, who originally needed the liver transplant.

When asked if he has a message for others considering living donation, Damian said, “You have the chance to do someone that is going to save a human life. This is one of the few things in life that has such a big reward attached to it. It is a great feeling. You can’t put a price tag on that feeling. Anything worthwhile in life always costs something.”

“Doing a good deed for others always benefits us: we feel better about ourselves. What greater gift can we give to another, whether it be a loved one, family member, friend or even a stranger, than the gift of a new lease on life. The choice of becoming a living donor has its challenges and its rewards. What it gives back to the donor is beyond words. I’d say if you’re healthy, and can donate, please consider it. You won’t regret it!”