Ken was diagnosed with Polycystic Kidney Disease at the age of 24. This diagnosis would eventually lead him to a kidney transplant. Ken remembers his diagnosis clear as day. 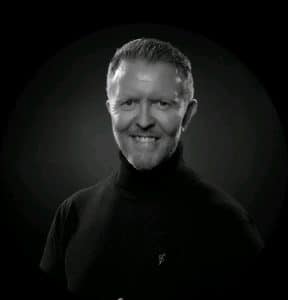 It started as a typical day, but after dinner, Ken felt pains in his stomach area and dead pains in his back. These pains had been off and on for the past two years. As the pain continued to get worse, Ken decided to visit his local hospital.

At first, doctors did not know what was wrong with Ken and figured it was a case of bad constipation. After 13 hours without a clear diagnosis, Ken’s calm demeanor began to fade. The next morning, a new doctor decided to take an x-ray.

After the x-ray, Ken fell asleep in the waiting room. When he woke up, he was told to go back into the doctor’s office.

“I will never forget those words when I entered the doctor’s office, ‘take a seat there,’Mr. Kirwan, we need to have a chat,’ he said, what he did next was quite strange, he took an A4 piece of paper and got a black marker from his desk and drew two ovals and then like a child stabbed the black marker with a succession of dots within the two ovals. He handed me the piece of paper then, ‘See that Mr. Kirwan? …. that’s your kidneys’.”

Ken was shocked by this conversation. His doctor told him that he had polycystic kidneys, a statement that rang through his ears for the following years.

Ken had a lot of questions running through his head. His doctor reassured him, “it’s like being born with blue eyes; it’s not life threatening!”

How wrong that statement proved to be.

Ken didn’t know that a kidney transplant or dialysis would be in his future. His health deteriorated over the next few years as his kidney function dropped until one day he was told he had to start dialysis and get on the waiting list for a kidney transplant.

Ken is a professional singer in Ireland. In December 2007, he played shows every Friday and Saturday night.

“I loved being up on the stage in front of 300 to 400 people each night. To accommodate me being able to do the shows with no complications, I had to work my dialysis treatment around it, and I used to do it at 4.00 am on a Saturday morning,” he said.

Juggling dialysis and a musical career was difficult for Ken. He did his dialysis treatment during the day, and played shows at night, leaving little time to rest.

However, the morning of December 29th, 2007, proved to be very different.  Ken arrived at dialysis and took a nap. He was falling in and out of sleep when his phone started to ring. A private number was calling.

He didn’t answer it the first time when it rang.

“After the phone rang, the caller left a message, and when I listened back, I couldn’t believe what I was hearing. It was a lady called Regina from the transplant unit telling me that they had a kidney for me, and if I didn’t answer the phone, it would be gone. I was naturally over the moon, but as I was surrounded by people much older than me that had been on dialysis a lot longer than me, I contained my excitement,” Ken said.

Post-transplant, Ken lives life to its fullest. He sets new goals for himself to accomplish all the time, including taking up a new college course, fitness challenges, or booking a theatre for his own headline show.

To raise awareness, Ken is working on a book about his journey and hopes to get it published.  Ken also raises awareness on Instagram and Facebook.

“My advice to anyone waiting for an organ transplant is to stay positive and enjoy as much a normal life as possible. Be happy with the positive things in your life and value your family. Worrying and stress will not change anything so just be positive,” Ken said.

“The transplant was the best thing to happen to me, emotionally, physically, psychologically, and much more.”

Learn more about Ken at kenkirwan.com