My name is Patricia Metrick and I first heard of kidney disease when I moved to Arizona in the late 1980s. I read an article from Irma Bombeck who had the disease and was writing about kidney donations. I was intrigued and considered the possibility of pursuing donating, but time flew by and I was under the impression that you had to be asked to donate – you couldn’t just offer to give up one of your kidneys. Boy, was I wrong. 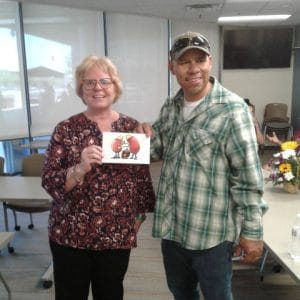 I became a regular blood donor and one day while donating, I spoke to a woman next to me who stated she had cancer and her t-cells were being removed that day in order for her to receive treatment the next day- then her t-cells would be given back to her. While we were speaking, the technician was withdrawing my needle and said how they really needed platelets and that I could donate every 2 weeks. Well, you didn’t have to say that twice- a few weeks later I became and still am, a platelet donor.

I still had donating a kidney in the back of my mind, but life got in the way. Last April 2018, I saw a plea on Facebook for a kidney donor here in Phoenix AZ. I immediately inquired as to the process and was introduced to the donor coordinator of Banner Hospital Transplant team, Madelyn Rucco. I went for initial blood work for cross-matching. In the meantime, I also talked this decision over with my husband – he is my biggest supporter. Each time I received an email from Madelyn with instructions for lab work or MRI or any other appointment, I stopped what I was doing and immediately made the appointment. Then, I had to wait for the doctor’s appointment for reading the results.  That was time-consuming as I was hoping it could be done ASAP, but the doctor had other patients… 🙂

In August 2018, I flew back east to visit my brothers and their families as well as my husband’s family; we discussed my decision and got full support.
One of my brothers summed up the decision by saying, “if my daughters or wife needed a kidney, and there were no matches within the family, I would want someone like Patricia to just offer hers, even though she doesn’t know us.”

Well, that settled it, full support and prayer – I got this… 🙂 I also spoke with our parish priest who was very supportive and informative as far as church teaching goes – all approved – this was truly God’s will.

In February, I met with Dr. Perry, the surgeon, who upon meeting me for the first time said “you have nice arteries” What? Apparently, he was looking at the CT scan and liked what he saw. The next phrase made this all too real for me. Dr. Perry stated, “I am taking your left kidney.” That was it – the countdown had begun.

By the end of February, I had an appointment to meet with Madelyn, who stated that they found a recipient and surgery was scheduled for the end of March 2019. Wow! It is real.

Our March date came and went, the surgeon was sick with an upper respiratory infection. The surgery date was rescheduled for April 2nd. I was ready with NO hesitation.

On April 2nd, the surgery took place. My recipient, David, and I were doing well. I stayed in the hospital for a total of 4 days – NO pain, some discomfort, and a little getting used to learning how to get out of bed. The hospital staff could not have been nicer and I saw Dr.Perry and his associates each morning on their early rounds.

Prior to the surgery,  I wrote a letter to David, but at the time I did not know his name as this was a non-direct donation. My sister is an artist and I asked that she draw a cute picture of two kidneys hugging goodbye. Then, I had this picture put on card stock and included this in the letter. I gave David brief information about myself and stated that I hoped we could one day meet. I gave the envelope to Madelyn who assured me she would see that he received it.

On the day of my discharge, Madelyn came into the room and handed me a letter from David, I now knew his name. He wrote a beautiful letter telling me about himself and his family and the day to day life he led as a dialysis patient – it was very moving.

On Thursday, May 30th, 2019, David and I along with our families met. We hugged and at that moment I realized I helped save a life! We were interviewed by a TV crew and it was emotional and joyful. What was also amazing is that David’s wife tried to donate a kidney to him since she was not a match she continued on with the testing process and donated as a non-direct. we all had the opportunity to meet on that day.

After the interview, before the cameras were off, I said to the crew, “we have a question for all of you: when will you be tested?”

Guess what? One of the newscasters stated her father passed away from kidney disease and she said that once her daughter is a little older, she will be getting tested! 🙂

I am very interested in becoming an advocate for kidney donations and I would do this again in a heartbeat if I could.