Our daughter Rylee was a gift from the beginning.  Even before she was born, we knew she was strong, mainly because she was able to kick and punch me more than either of her brothers.  When Rylee was first born, she was perfect.  Her brothers, Cody (6) and Wade (4) were so excited to meet her and couldn’t get enough of her.  Once we were home, she was spoiled by her big brothers.  She would stare at them, and they would try to get her to take all the toys they thought she would like, eventually leaving them next to her when she wouldn’t grab them.  The boys would take turns laying with her on the floor, admiring her, playing with her, and just talking with her. When she would grab onto their fingers, they would light up with excitement.  Wade, the youngest, was always the first one there when it was time to change her.  He would get the new diaper ready, make sure we had wipes available, and take the trash.  Both boys took great pride in taking care of their little sister. 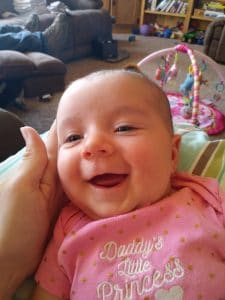 When Rylee was about a month old, we were able to take a family trip to the Eagle Cap Wilderness where Rylee got to enjoy some time in nature, watching her brothers learn to fly fish and staring into the campfire.  Having just begun to smile, we all spent time trying to get one another one out of her.  It was a trip we valued at the time, but now this is priceless as one of only a few family trips Rylee got to be a part of.

Around 2 months old, she got to enjoy the Harney County Fair.  She got to watch her first parade, and her brother showered her with candy they gathered.  At fair, she was loved on by everyone, and passed around to friends and family, all calling dibs.  She was the first person her brother, Cody, showed his newly won Muttin’ Bustin’ buckle to.  I’m sure she cried on occasion, such as when she got hungry, but she was a trooper as we shuffled her around in the heat so her brothers could enjoy the festivities.

The next month was filled with more vacations. We took a family trip to the Oregon Coast, where she got to experience the ocean, sand, a train, and the Tillamook Cheese Factory.  She seemed to enjoy watching her brothers fly kites.  The weekend after that we traveled to Union to her Uncle’s wedding.  While her dad was helping set up for the wedding, her brothers and I took her on a walk, where they filled her stroller up with all the flowers they could find, calling her their flower. Her dad and brothers were all in the wedding, and we were lucky enough to get some family pictures taken, what turned out to be the only family picture we would have.

Rylee as a very easy happy baby.  At her worst, she would cry, not too loudly, for maybe ten minutes.  But usually, she was at her best, doling out smiles to everyone she would see or meet.  It was rare that you couldn’t get her to smile.  One of Rylee’s favorite things, as she got older, was “jumping” with her dad.  She would smile and laugh at him the entire time, something we were lucky to have caught on video.

At the end of October, we all had colds. Nothing much, just some sniffles and mild sore throats.  Eventually, Rylee seemed to have caught it.  She was a little fussier and not eating well.  She had no other issues and was still smiling and playing.  After about two days, it became difficult to get her to nurse or drink from a bottle.  As there were no other issues, we were starting to be concerned about dehydration and took her in the next morning. She was showing some weakness holding up her head, but nothing that wasn’t explained by not eating well for a few days. The doctor was concerned about her fluid intake, and we went over to the emergency room for them to place an IV.  After trying for an hour or so, with some weak cries, they were unable to get an IV in due to her small veins, so we were admitted into the hospital where a nasogastric tube was placed, and we were able to feed her a few ml of formula every 15 minutes throughout the night. 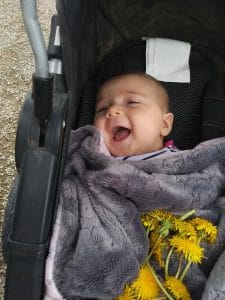 The next morning, she wasn’t dehydrated, but she still wasn’t eating on her own and showing weakness when trying to hold up her head.  No other symptoms were present as she was still waving her arms, kicking her feet, and providing us with her trademark smile on occasion.  In fact, she rewarded us with her smile just before we left the room so the doctor could complete a lumbar puncture to test for meningitis. When she was rolled onto her side, before the procedure started, she went into cardiac arrest.

The doctor’s worked on her immediately.  After about 40 minutes they were just to the point of telling us they would work on her until we told them to stop, but that it didn’t look good.  Before we had to make a decision, they got a heartbeat.  She was stabilized and placed on a ventilator, and I flew with her to Boise to go to St. Luke’s pediatric intensive care unit.  Due to her small veins, it took several hours before she was stabilized and they were able to do a CT scan.  Our little girl looked terrible, it was hard for us to see her that way, and we were prepared for the worst, so we were surprised when the doctor came and said he didn’t see the brain swelling he’d expected, and that we would have to wait and see if she would wake up.

At the hospital, one of the nurses told us that Rylee’s name means courageous, and so, we began praying for our courageous miracle and decided she loved butterflies and the color purple.

As we waited, the doctor’s gave her time, and then explained we would do an EEG to determine brain function.  When after 24 hours there was no activity, Kyle and I began to face facts, our Rylee would probably not be coming home.  While her body was recovering from her ordeal, her brain refused to.  We wanted to give her the benefit of the doubt, but we were also realists.  We asked about organ donation.

Without really talking with each other about it, Kyle and I both knew that while we were suffering and there would be no miracle for us, perhaps Rylee could be a miracle for others.  While the doctors and nurses were providing Rylee and us with as much comfort and prayer and support possible, knowing the situation looked grim, we began working with the donor team to find matches, and doctors that would be willing to accept her gifts without knowing what had caused her cardiac arrest in the first place. 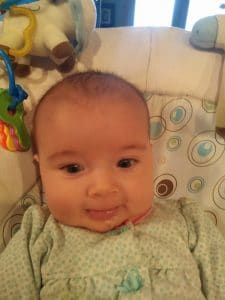 Eventually, Rylee was officially declared brain dead.  At this point in our story, the only thing keeping us together was knowing that there were others she could be a miracle for.  For organ donation, it was required that the coroner release her. The investigator came to the hospital, looked over her files, and told us he didn’t see any issues, but would get back to us letting us know if we could move forward.  A few hours later Rylee’s doctor and staff from the organ procurement organization came and told us that the coroner was refusing to release her for donation due to not knowing what caused the cardiac arrest.  This was our low point. We felt like the one thing giving us comfort, that Rylee’s life could be used to save others, was taken from us.  They told us not to give up hope yet, that they were going to talk to the coroner and could figure it out.  Rylee’s doctor told us he was at peace and he truly felt like it would work out, and to trust him and give him some time.  We tried to do that and sat waiting with our daughter.  Eventually, they were able to work out what the major concerns were, run some tests, and we were allowed to move forward with the donation.  We were given back some air, not much, but enough to hang on to.  In November Rylee was taken to surgery and donated her heart, kidneys, and liver to three recipients.

Driving the 3 hours home without her, was the hardest thing we have ever done.  But knowing that at the very least, she gave three other families some hope, gave some purpose to our loss and our pain.  Knowing she did everything she could to prevent other families from going through this pain has been an enormous comfort and blessing to us.  It doesn’t take away the pain, but it does help with the sharpness.

This experience showed us how vital organ donation is, not just to the recipients, but also to the families of the donors.  We have not had contact with any of her recipients, but we hope to because we want them to know, first hand, how much being able to donate has helped and healed our family, and that we pray her gifts were the miracles they needed.  Even in our darkest hours, there lives hope, and this entire process has helped show us that.  We are honored that Rylee was able to be a part of this quilt.  That she will live on in those who look on at her smiling face surrounded by purple and butterflies, and that she can be a reminder to all who view this quilt that there is always hope and light in the world.