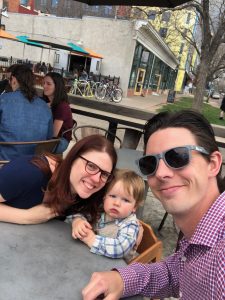 Several years ago, Tyler overheard a conversation about living kidney donation. This topic always stuck with him, although it would take several years for the idea to come to fruition.

Tyler was in a work accident in 2009, which left Tyler with an amputated foot. “I learned to live with missing parts, so I knew it was possible,” Tyler said.

Tyler later married his wife, a kidney transplant coordinator. Naturally, Tyler heard a lot about living donation from his wife and around two years ago, the plan to donate a kidney began to take shape.

“We had just adopted our newborn son, and we were trying to find the best time,” Tyler explained.

“It was a no-brainer at that point,” Tyler said.  “My son is adopted, so there is no guarantee that we would be a match if he ever needed a kidney in the future.”

This also answered one of the biggest concerns of altruistic kidney donors: what if someone in my family needs a kidney transplant in the future?

On April 9, 2019, Tyler donated his kidney to a stranger in Chicago. This donation was part of a chain that saved multiple lives. Tyler received support from his family, and his brother came to help with the baby during his recovery. 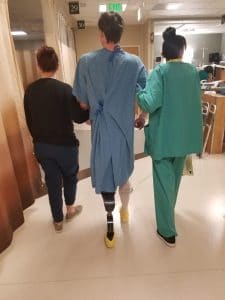 “The hardest part was being out of work for four weeks,” he said.

Tyler recently had the opportunity to meet his recipient in Chicago.

“We had an instant connection,” Tyler said. “We will absolutely stay in touch.”

To others considering donation

When asked what advice he has for others considering living donation, Tyler recommends contacting your local transplant center to learn more about the process and what it entails.

“Hopefully my son never needs the voucher, but it is good reassurance,” Tyler noted.