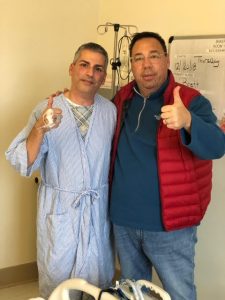 In April 2018, Detective Lollo saw an NYPD Intranet posting about another police officer that needed a kidney.  Michael inquired about donating but did not receive a response.

Michael didn’t think about living donation again until September 2018, when he saw an article about Marc Weiner, a man who had a Times Square billboard donated to him to help him find a kidney donor. Michael contacted Marc and began his journey to donate a kidney. Unfortunately, it was discovered they were not a match.

Michael was told that if he wanted to donate, he could become a Non-Directed Donor which could create a kidney chain.

“It seemed selfish not to try,” Michael said.

On December 19, 2018, he became a Non-Directed Donor, and his kidney was successfully transplanted to his intended recipient, a stranger from Pennsylvania. This act of kindness created a two-person kidney chain, and Michael later discovered that his kidney went to a 59-year-old woman named Ruth.  While her husband was not a match for her, he continued the “chain” and donated his kidney to another recipient in need.

Michael has been fortunate to receive an update on his recipient’s health, including an update just five hours after his surgery where she was reported to have normal kidney function. 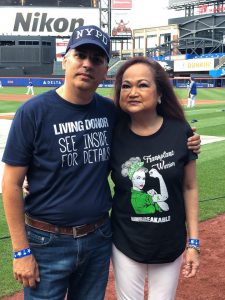 Michael and Ruth at Citi Field

In July 2019, Michael and Ruth had the opportunity to meet in an unforgettable way. When Ruth found out that her donor was from New York City, she mentioned that she is a huge Mets fan. That was when Michael decided to contact the Mets about hosting their meeting.

The Mets agreed, and on the day of the meeting, they set up a few special experiences for Michael and Ruth.

“It was very emotional meeting her,” Michael said.

Michael notes that both his wife and children were incredibly supportive of his decision to donate, and without such support, as well as the support of his entire NYPD family, this would not have been possible. 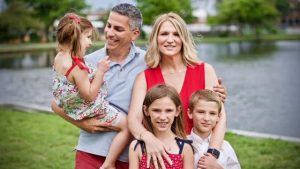 Michael’s advice to others considering living kidney donation is to do your research and speak to someone else who went through the process.

“I spoke to 10-12 people that donated before I made my final decision,” he said, noting that he found people in Facebook groups.

He now continues to promote organ donation awareness and hopes to help educate and inspire others to consider living kidney donation. Michael noted that another police officer recently asked him about the process, and is considering living donation himself.