Shawn recently celebrated his first kidney transplant anniversary, thanks to his friend and living donor, John.

Over 15 years ago, Shawn met John at a church retreat in Miami. The two became fast friends, and Shawn shared that he had Polycystic Kidney Disease (PKD). When Shawn explained how PKD leads to kidney failure, John immediately offered to donate.

Through the years, the two remained friends, and Shawn even became John’s daughter’s Godfather. Shawn’s kidney function continued to decline, and John continued to offer his own kidney. 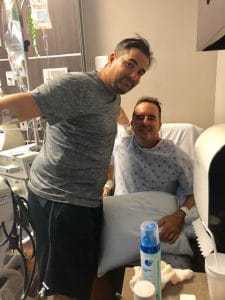 Work became hectic for Shawn, too. Shawn is a radiologist and often works with dialysis patients. This was a constant reminder of what his future could hold.

In 2017, Shawn’s kidney function declined rapidly. Shawn’s doctors began to recommend dialysis, and it was difficult for him to keep up at work.

Shawn’s family members inquired about being his living donor, but they were unable to donate. That was when he called John and told him what was going on.

John sent in his paperwork in the next day, and on August 31, 2018, Shawn received his kidney transplant.

“It was a difficult ask, but John knew what was going on,” Shawn said. “I wanted to make sure I didn’t have another option before I asked him. We didn’t even know if he would be a match. I just hoped for the best because if John wasn’t a match, I would be out of options.”

Shawn began to feel better immediately after the transplant. His kidney function went back to normal in just two days. 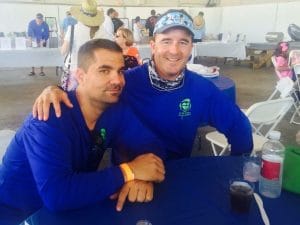 The donation made both families even closer. They live a few hours apart from each other, but always try to visit.

“When you donate a kidney, it is a family decision,” Shawn said. “It is a really special thing. We feel like it was meant to be.”

To Those in Need of a Donor

Shawn encourages others in need of a kidney to put their fears aside and ask others to consider donating.

“You have nothing to lose; it is a small sacrifice to pay to be alive,” Shawn said. “Let people know what you’re going through. Social media is very powerful; it helps people put a face with the story.”

To help raise awareness, Shawn continues to share his story. He came from a small high school, and a classmate donated his kidney to a colleague two weeks before Shawn’s transplant. After hearing their stories, another classmate became a non-directed kidney donor.