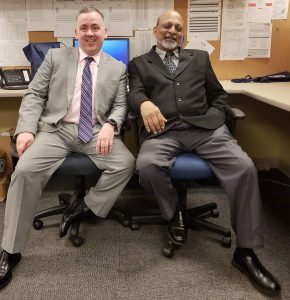 Roy is a store manager at a regional furniture retailer called Raymour & Flanigan. In 2019, Roy’s store gained a new associate, Randy. Randy had requested a transfer to a store that would make his commute easier, as he is the caregiver to his 21-year-old son with brain cancer.

Two weeks after Randy started, he went into Roy’s office after returning from a doctor’s appointment. Randy told Roy that he was in total renal failure and needed dialysis or a kidney transplant.

Roy patted Randy on the back and said, “don’t worry, you can have my kidney.”

Randy assumed Roy was kidding and dismissed the comment.

Roy went home and told his wife about the conversation.

“She thought I was crazy,” Roy said. “I had only known Randy for two weeks.”

Roy asked Randy which transplant center he was registered with, but Randy still didn’t take the offer seriously. When Roy found out that he was a match, he and the district manager brought Randy into an office. They told him that Roy was a match.

“Randy started to get emotional,” Roy said. “He excused himself and called his wife and kids.”

Raymour & Flanigan was very supportive and even awarded Roy and Randy their annual Spirit Award.

Just 13 days after Roy’s living donation, he returned to work. One month post-surgery, he climbed Mount Tammany in New Jersey.

For their first transplant anniversary, Randy brought his family to visit Roy in Pennsylvania.

One year later, Roy is focused on raising awareness, hoping to encourage others to consider living donation.

“If you are considering donation, don’t be scared to look into it,” Roy said.