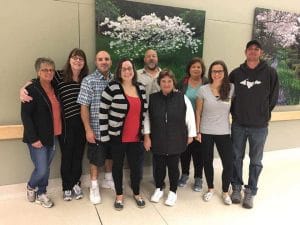 If you could save a stranger’s life, would you?  If so, check out LiveDonorToolkit.com to learn about living donation.  Here’s Amanda and Nicole’s story.

Amanda and Nicole met in 2015 in a Facebook group about parrots and connected over their mutual love of helping them. Both Amanda and Nicole have old wild-caught Amazon parrots and chatted a little about health issues that their #oldmanamazon parrots were facing. They had the opportunity to meet in person when Nicole assisted with the care of a surrender Amanda had while waiting on parrot rescue space.

In 2016, an acquaintance that started as an online connection about parrots ended up saving Nicole’s life. 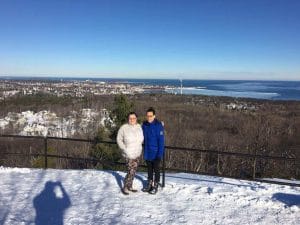 Nicole was diagnosed with PKD when she was 14 years old and always knew she would someday need a kidney transplant. Nicole and her care team thought this would come later in life, so it was a shock in 2016 when she found out that she needed a kidney transplant or would have to go on dialysis.

She was put on the transplant waiting list and posted information on social media for anyone interested in becoming a living donor.

Amanda knew right away that she wanted to get tested to be a living donor.

“My husband thought I was crazy; he was really nervous,” Amanda said. “He needed some convincing, but he finally agreed.”

When Amanda found out she was a match, she was super excited. They didn’t tell anyone besides family until it was completely confirmed that she could donate.  Their first “yes” was taken back 90 minutes after Amanda was told she was approved to be Nicole’s donor (more testing required) so they didn’t want to get anyone’s hope up until it was a done deal.

Nicole and Amanda saw each other in person for the fourth time on the day of the transplant. 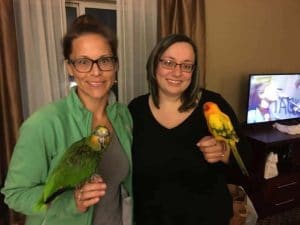 During the transplant surgery, there were some initial complications for Nicole. Amanda didn’t know what was going on at first and feared that Nicole would face rejection with the new kidney.

Thankfully, Nicole’s surgery was successful and Amanda’s kidney was a perfect match.

“We were a great match,” Nicole said. “Amanda’s kidney was a better match for me than members of my own family.”

Nicole noted that the biggest challenges post-transplant has been medication-related. “I didn’t expect to get diabetes from anti-rejection medication,” she said.

Amanda and Nicole say that they are like sisters now. There is a 17-hour drive between them, but they talk most days and plan to get together for their 3-year kidney anniversary which is in October this year.

“This all happened because we connected on Facebook over birds,” Amanda said, “it’s mind-blowing and heartwarming that a couple of senior parrots ended up saving a life.”  Please join us in spreading awareness of living donation on Facebook.