Last October, Joy decided she wanted to be a living kidney donor. She didn’t have a recipient in mind, but she filled out a questionnaire and was told she could proceed with medical testing.

“I just woke up one day and decided I wanted to be a donor,” Joy said.

A couple of weeks later, she came across a Facebook post from a local man named Mike, who was looking for a living donor. It caught Joy’s attention, but she didn’t reach 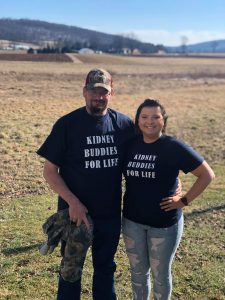 out. A couple of days later, she went back to his post and thought it could be a sign that she was meant to donate. Then, she noticed that Mike was registered with the same hospital where she had filled that questionnaire.

Joy sent Mike a message asking if he was still looking for a donor. He revealed that he had several people testing, but no matches.

On January 16th, Joy went to Washington, DC, for a day full of testing. She was questioned a couple of times with the “why would you donate your kidney to a stranger” question, and she had no clue how to answer. Every time it was asked, Joy just shrugged and said, “if he needs it, why wouldn’t I give it?”

In the weeks following, her test results started flowing in. They sent her for one final test, the crossmatch. This test consisted of both Mike and Joy’s blood being mixed and spun in a vial. If antibodies were present, this was a positive crossmatch. If no antibodies were present, it was negative. They wanted the test to be negative. Four long days later, Joy got the call that she was Mike’s match.

“There is no better feeling than being able to tell someone you’re going to save their life,” Joy said.

“When someone volunteers to give you a kidney, it is pretty exciting,” Mike said.

Joy and Mike clicked right away and were instant friends. “He couldn’t believe that someone would donate,” Joy said.

They scheduled the surgery for April 4th. A couple of weeks later, Mike and Joy went to pre-op and had more tests ran. They also ran a second crossmatch to confirm if the two were still a match. One week before their scheduled surgery, Mike and Joy got the call that their crossmatch came back positive. This meant that Mike’s body had a higher chance of rejecting Joy’s kidney.

They were both devastated. The surgeon explained to Joy that she could enter in a Kidney Paired Exchange. At that point, Joy told Mike she was going to do whatever it took to help him. Some people expressed their concerns about the kidney paired exchange, but for Mike and Joy, it was their only option.

Joy wasn’t too concerned about kidney paired exchange. Her main goal was to make sure that Mike received a kidney right away and didn’t have to keep waiting.

In mid-July 2019, Joy told Mike that she was just physically and mentally ready for the surgery. She asked him if it was okay that she proceeded with the donation. He was on board with whatever she wanted to do.

Joy didn’t know how long it would take for Mike to get a match, but fortunately, the hospital was able to find her a match in just four days. On August 6th, 2019, Joy donated her kidney to a young man in Richmond, Virginia. On September 24th, Mike received his second transplant, and he is doing well.

To Others Considering Donation

“Be aware of the process and talk it out,” Joy said. “It is a long process, and if it is meant to happen, it will happen.”

Mike and Joy have a great friendship to this day. A lot of people thought Joy was too young to donate at the age of 22. Her family thought she was crazy for even entertaining the thought, but were ultimately supportive.

“I will be forever grateful for everything she did to make sure I got a kidney – it pretty incredible that a 22-year-old would want to donate a kidney,” Mike said. “I wish more people thought about donating.”