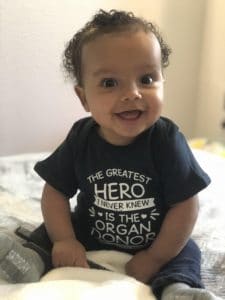 In April of 2019, Lisa Macfarland welcomed her 2nd son, Kingston, into the world, who appeared to be a happy, healthy baby. Yet, 2 weeks after Lisa gave birth, Kingston was no heavier than his original birth weight. Doctors insisted to Lisa that she was simply not feeding her son enough, and suggested supplementing with formula. However, as much as she tried, Kingston took very little interest in taking any formula after breastfeeding and refused a bottle most of the time.

Soon enough, Lisa began to notice a yellow-tint to Kingston’s skin and eyes, along with observing his seemingly very large belly in comparison to his thin arms and legs. Still, her doctors assured her that these symptoms were normal for a child his age, but they were still concerned about his low weight gain and could not figure it out. Weeks went by with Kingston only gaining no more than 4-5 ounces every week, and doctors still asserting that he was not being fed enough. “How could they have thought I wasn’t feeding him enough? It was almost as if, do you think I am a bad mother?” Lisa reflects.

More time went by, and Lisa recalls having to outwardly oppose her son’s pediatrician to advocate for Kingston and investigate his symptoms further. He had a normal chest x-ray, and an ultrasound didn’t reveal that anything was amiss, but after some bloodwork, the physician noted slightly elevated liver levels and suggested retesting in another 10 days. Soon after, Kingston’s follow-up blood work results came in, Lisa received a call from the pediatrician, who advised her to take her son to the hospital and mentioned the likelihood of a diagnosis of biliary atresia.

After Kingston was admitted into the hospital, he was kept for 5 days before testing confirmed that Kingston did, in fact, have biliary atresia, which was compromising his liver. He had a surgery called the Kasai procedure, which is the only effective treatment for Biliary Atresia, but sadly is only effective about 30% of the time. The doctors said it would be 60-90 days before they could deem the procedure a success or a failure.  Weeks went by with multiple hospital readmissions, cholangitis, and the placement of an NG feeding tube. Kingston’s labs never trended back in the right direction. The Kasai was deemed a failure. On Sept 2, 2019, Kingston was admitted again for a possible infection. On the 10th day of his admission, Kingston was placed on the waiting list for a liver transplant. 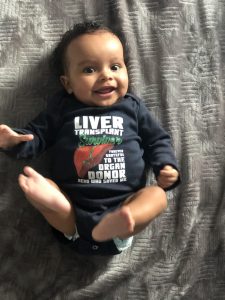 On October 3, 2019, members from her son’s medical team were coming in and out of the room in a different manner than usual. Lisa had a feeling that something was happening, perhaps there was word of a liver for Kingston. Not long after, the surgeon came to tell Lisa in person that there was a liver available for her son. Lisa immediately broke down, overwhelmed with emotion.

For months, Lisa tried her best to try to find a match for her son. She even attempted to find a transplant center that would be willing to allow her to give part of her own to her son. The day before she was told that a liver became available, she planned to take a trip across the country to a transplant center that was willing to perform a workup to see if she would be healthy enough to be a match.

Just two days later, on October 5, Kingston received his new liver with minimal complications from another young infant donor. Due to the distance between the hospital and her home, Lisa and her sons have been staying in the family house affiliated with the hospital caring for Kingston. She explains how incredibly kind the staff has been to her and her family throughout this entire process, along with all the help her mother has provided her with over the past year.

Reflections from a mother

As a single mom, Lisa states that it is very challenging to balance motherhood caring for Kingston, all while still providing her other 2-year-old son, Jackson, the love and attention he deserves. She further explains that even though she has been good at remaining diligent with maintaining Kingston’s medication regimen, it can be very stressful. 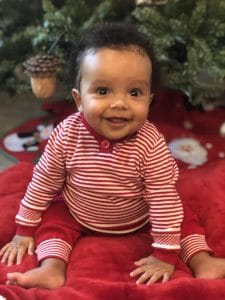 Although Kingston is recovering well post-transplant, she thinks about her son’s donor every single day. She reports feelings like those of “survivor’s remorse” because someone else’s child died for hers to have a chance to live. She has written and sent a letter to be given to the donor’s family when they are ready to read it, telling them how thankful she is for the gift of life they gave to her son and that they are constantly in her thoughts.

When Lisa is asked how this whole experience has changed her outlook on life and how she lives, she explains that many things simply don’t matter to her anymore like they did before.

“Nothing else in life matters if your child is sick. Your whole world stops,” Lisa said.

When others have asked her what she wants for Christmas she says, “My son has a liver, what more could I ask for?”

She wants to try her very best to provide her children the chance to experience the magic of the holidays, even though they are still residing at the family house for now.

Lisa’s story is a great example of how transplant affects individuals who identify as caregivers, being a parent of a pediatric transplant recipient. It is safe to say how this process can change the lives of not only the recipients, but their loved ones who care for them, also.