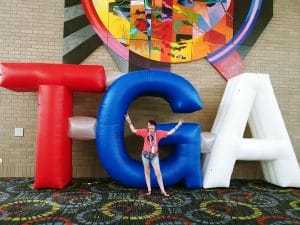 In September 2012, Ashley and her husband were preparing for the upcoming birth of their daughter, when Ashley went into labor at only 22 weeks of her pregnancy. Shortly after delivery of their daughter, unfortunately, passed away. Not long after the delivery, Ashley began to bleed heavily, and during a DNC her lungs began to fill with fluid quickly. Shortly after that she was referred to a larger medical center, where in May 2013, her medical team discovered significant scarring on her lungs after a biopsy. She was later diagnosed with Pleural Pulmonary Fibroelastosis. The only cure for her diagnosis was a double lung transplant. 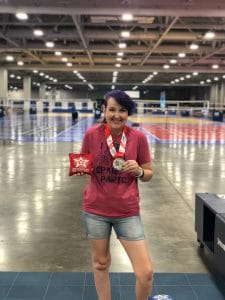 Over the next year, Ashley had been working as a CNA, where she would typically need to complete long shifts on her feet or carry heavy equipment. By the end of the year, she was unable to perform her job and needed to apply for disability. She required a feeding tube and needed to remain on the first floor of her home due to the declining state of her lungs. She slept on a hospital bed during that time, relying on oxygen at night. She recalls only being able to get from her bed to her bathroom and her chair every day. Daily tasks were nearly impossible to complete. Due to the condition she was in, she had lost so much weight that she weighed too little to qualify for transplant.

When she finally gained enough weight, she was evaluated for transplant on May 28, 2015, she was at her hospital for a check-up and was admitted for high levels of CO2. Coincidentally, a young woman was in the same hospital being taken off life support who was a perfect match. Ashley recalls the excitement, thankfulness, and fear she felt when she was told that she might be finally getting a pair of lungs. As a woman of faith, Ashley and her best friend, Tabitha, along with her parents and husband prayed and prayed for a successful and safe surgery. 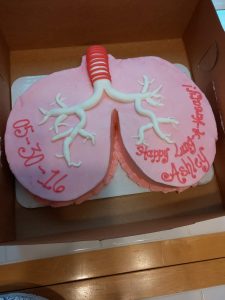 She waited less than 24 hours, and she received her new lungs after undergoing a 14-hour long surgery. Before she entered the operating room, she remembered entering the elevator and seeing her father waving goodbye as the doors closed. The next thing she remembered was waking up and feeling her breathing tube that would assist her for the next number of days. Because of this, she was unable to communicate while talking for up to a week, but vividly remembers the day they removed her tube. She can recall the feeling of taking her first full deep breath and how amazing it felt.

She was not able to go home for next four months. Those four months came with complication after complication. She remembers two instances of lung collapse and experiencing pneumonia.

Ashley states how wonderful her family and friends have been to her throughout her entire experience. From the beginning, her husband, parents, sister, and best friend have been by her side. Her mother and sister took off time to spend with Ashley to help her recover. 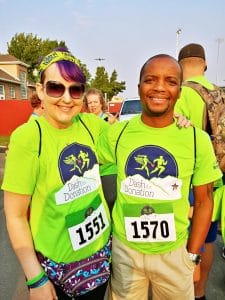 Sticking with her medication schedule has been going well, but she attributes this to the help of her mother for learning her schedule and teaching Ashley when and what to take throughout the day. She also has built the habit of using her cellphone alarms to remind her when to take her medications.

In addition to a difficult start to her recovery, Ashley spoke of how hard the first year post-transplant was where she still struggled with performing normal, everyday tasks. She suffered from depressive feelings, being unable to leave her house for a long time, with only going outside mostly with her therapists that regularly visited her home. Her parents took her on outings often.

It was not until this year that she was able to finally meet her donor’s family after exchanging letters here and there. She speaks of how happy she was to finally meet them in person, express her gratitude, and learn more about the young woman who gave her the gift of life. 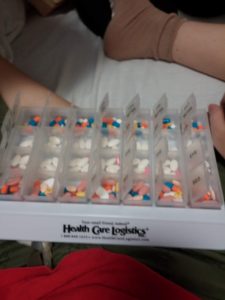 She also has found more social support by connecting with other lung transplant recipients nearby to her hometown. Ashley has enjoyed attending the Transplant Games of America, where she has competed in cornhole with her good friend, Charles, and earned a silver medal in 2018. They plan to compete together again at this year’s games in Northern New Jersey and may also compete in bowling.

Every year on May 30, she celebrates—what she, her friends, and family call—her “lung-a-versary.” Ashley will be coming up on her fifth “lung-a-versary” and will be celebrating by going to see her favorite singer, Lauren Daigle, with her best friend, Tabitha.