Luke and Jesse’s Story – as told by their mother, Kylie 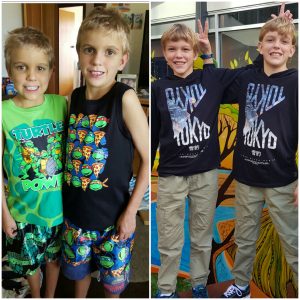 The Wilson family’s story began as Kylie Wilson was experiencing her second pregnancy—this time with twins. Overall, she had a healthy pregnancy and normal birth with seemingly well, beautiful baby boys. However, three days after she gave birth, they began to notice that both babies had become jaundiced. Unfortunately, due to the condition they were in, the family was sent to Perth, Australia, 5 hours away from their home in Western Australia, where the closest pediatric hospital was located.

After genetic testing, they were both diagnosed with a condition called Alagille syndrome which can lead to multi-organ failure. In this case, it was not inherited, but considered a spontaneous mutation of the JAG1 gene at conception. In the twins’ case, the majority of this condition was expressed in their livers.

Six years passed by and both boys were still experiencing the progression of their liver disease. Due to this disease, both boys were suffering from osteopenia with the same level of bone density one would expect in an 80-year old. One day, Luke broke his femur in half while playing soccer. They were quickly flown back to the children’s hospital in Perth when the medical team informed his parents that his condition had drastically worsened, and he would need to fly to Sydney as soon as possible where he would be evaluated for potential liver transplant candidacy. 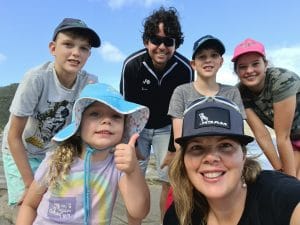 At this point, Kylie was pregnant again with her fourth child. Both boys were evaluated and placed on the liver transplant list. Luke was given an estimate of 12 months to live. Again, all they could do was wait. They planned to go home, give birth, and move their family to Perth where they could wait close by for each transplant.

A little more than three weeks after giving birth, the Wilsons moved their family to Perth. Not long after, they received a call at midnight that there was a match for Luke waiting in Sydney. They took the baby and Luke on the first flight out to Sydney, leaving Jesse and their oldest daughter with their family members in Perth.

Luke’s transplant surgery lasted roughly fifteen hours. Initially, the transplant recovery went smoothly, until he went into rejection as lost the graft, putting him in the ICU. In such a short amount of time, Luke was placed on the transplant list again. Approaching a week in the ICU, hope was dwindling, and the family began to prepare to say goodbye to Luke. They flew the rest of their family out to Sydney to be with him for what they thought would be his final days.

“My boy was tired, His little body had turned to skin and bone and every ounce was fighting for life. I was tired, I didn’t see how there could possibly be any other way for him, we promised him that the transplant would make everything better – how could we not give him what we promised? How could anything but the best outcome be ok?”

“It couldn’t. So, I was prepared to let him go. I couldn’t watch him fight for another day and I couldn’t see beyond the little white box that we were going to have to take him home in. It was at this point that I broke. I broke hard,” Kylie said. She is so thankful for how during those dark moments, Luke’s nurses and doctors did all they could to help her find hope again and stay strong for her son.

Soon enough, Luke was offered another chance at life for the second time and received his second liver transplant at just 7 years old. He was just 35 pounds and had not walked in three months. After 9 weeks in Sydney, the family was able to fly home, but Kylie and Jason questioned how they would be able to go through this all over again with Jesse?

Six days after returning home, the phone rang to inform Kylie and Jason that there was a liver available for Jesse. They immediately picked him up from school and flew the whole family out to Sydney, yet again. Sadly, Jesse’s new liver failed quickly after transplant, and he, too, was placed in the ICU leaving the family to live this nightmare all over again as they did with Luke. Thankfully, just two days later, Jesse went in to receive his second liver transplant. It was a success! Just four days later, Jesse was up and walking around the hospital ward and was discharged and back home in just three weeks.

Today, Luke and Jesse are incredible. It has been almost four years since they have experienced any signs of rejection and their medications have been dramatically decreased to only one medication. Kylie and her husband, Jason, describe them as “fighters, cheeky, spunky, and everything you would expect twelve-year-olds to be.” They go on to say that the boys went from tired, lethargic little humans to receiving first and third places in the school cross country, going to interschool sports carnivals, and blitzing the 2-kilometer Elleker Kid’s Marathon – coming in 13th and 19th out of sixty kids. They play soccer, basketball, cricket and are finally able to be in a pool and have learned how to swim properly. They have these incredible clear, white eyes, and their hair no longer looks pink. They have little boy six-packs, rather than round bloated tummies filled with ascites. They now have a love for spicy food and rollercoasters and enjoy trying new things. They love anything sporty they can do with their Dad, and are always begging their parents to go outside, ride their bikes, and play.

“Diseases like this do not discriminate,” Kylie reflected, “When you have a family with children, life still goes on. It’s never going to be perfect, but you have to just make it work.” She tries to not look at other’s and compare their lives to her family’s. “Children are so resilient. They have the ability to just keep looking forward and it’s such an amazing thing we try to learn from them,” she said.

In Australia and New Zealand, there are organ donation policies put in place that does not allow the facilitation of connecting donor families to recipient families to protect both parties involved. One can, however, send an anonymous letter intended for your donor or recipient family, and Donate Life Australia will screen them for personal information before passing them along.

Every year at Christmas she hangs four hearts for each donor that helped Luke and Jesse. “As a mom and dad, we can understand how much it could have taken to give that gift for someone else’s child,” Kylie said. Kylie also writes a letter to each family. She has not yet received any replies.

Kylie stated that she focuses mostly on her sons’ transplant anniversaries alone, and only talks to her boys about their experiences occasionally. “As their mother, I will take any burden for them, so they can just be kids.”

“Given the path I have walked, any opportunity to share is an opportunity to help,” Kylie said. “To encourage and to show you that each and every one of us who has been called to his road, whether we like it or not, together we can help each other. But, only If we are willing to be open and honest, even to go within ourselves and share the things that perhaps seem best kept unsaid.”

The story of the Wilson family is most certainly not the most perfect or at all what they expected, but an absolutely inspirational one to say the least—proving that transplant family caregivers go through the entire transplant journey with you and are, most certainly, our community’s biggest heart and support.