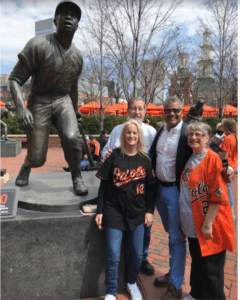 Two and a half years ago, I received a kidney for transplant from a live donor, whom I had never known in real life or in person. We met only because we were both Baltimore Orioles baseball fans.

Here is our story:

As we all know, the Baltimore Orioles had a miserable season in 2018. They had the worst record ever and a totally forgettable year. But it turned out to be a very important year for this lifelong fan.

I was a member of an Orioles fan group on Facebook called Orioles Magic, where I connected with other fans. I became personal friends with some of them; sometimes we would meet up at a game and get to know each other in person. I bonded with one woman in particular: Shannon was originally from the Pasadena/Glen Burnie Maryland area, but she had moved to Indianapolis, Ind., to be closer to her family after her husband had suddenly passed away. We became regular friends on Facebook as our friendship extended beyond baseball. That’s how Shannon learned I was in the end stage of my illness. About six years ago, I was diagnosed with kidney failure, and I had reached the point where I had to go to on dialysis.

She messaged me, “How can I help you? I would like to learn more about organ donation and get tested to see if I can be a match for you.” At the time, we had never met in person.

I had already been on the transplant list for two years and was told it would be a very long wait to find a match for me. I sent her a link to the Living Donor page at the University of Maryland Medical System, and she followed through. She received a test kit, and a few days later, she excitedly called me and said we were a match, a “five out of five!” I was shocked, and for the first time in a long time, hopeful.

After a year of testing for each of us, Shannon came into Baltimore to be evaluated. Sadly, her social worker eventually told her — without explanation — that they could no longer accept her as my donor, despite being a seemingly perfect match.

We were not deterred. After receiving advice from the Universal Donor Registry for our region, I called George Washington University Hospital in Washington, D.C. Their transplant unit said they would love to set us both up with their coordinators to evaluate the situation; we were told to just bring our previous testing results with us.

So Shannon came in again from Indiana, but this time the results were different: We were both accepted for transplant. We received a surgery date within a matter of weeks.

On Dec. 17, 2018, I received my miracle kidney from this wonderful lady who had never met me prior to testing, and the only reason she knew about me at all was because we both loved the Baltimore Orioles.

She was able to recover quickly and went back home to Indiana a few days after the transplant. I am maintaining my recovery after having a few complications, but we promised each other we would go to the home opener together on April 4th, 2019. We even invited my transplant surgeon, Dr. J. Keith Melancon, who lives in Baltimore. He was excited about going with us, barring any unforeseen events.

My husband Jim and I picked Shannon up from the airport and met Dr. Melancon at a bagel shop near his home (Even though he had told us he was originally a Yankees fan, we did not hold that against him) before heading off to Camden Yards.

The game started out with the Orioles enjoying a 4-0 lead, but by the time Dr. Melancon had to leave and take a MARC train back to D.C. for hospital business, the Orioles bullpen had blown the lead. Still, it was a day we will remember forever, despite the end result.

I am forever grateful to the Baltimore Orioles and Shannon Adelung,  for saving my life. The Orioles will always be winners to me, no matter what their record is or where they are in the standings and Shannon has a life-long place in my heart.