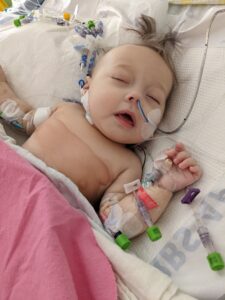 This story was written by Charlotte’s mom, Maggie.

Charlotte appeared to be perfectly healthy when she was born. It wasn’t until 6 weeks old when we noticed her looking jaundiced, that we wondered if something was wrong. Our pediatrician ordered lab work for her and called us that same evening to tell us that her direct bilirubin was elevated, and we needed to pack up and head to the hospital so they could run some tests.

I remember the drive to the hospital, so sure that they would find that everything was normal and there was a simple explanation. Unfortunately, after days of tests, she was diagnosed with Biliary Atresia, a rare liver disorder where the bile ducts are either damaged or do not form properly. Because of this, bile is unable to drain from the liver, causing jaundice and eventually liver damage.

We handed our tiny baby over to surgeons at 7 weeks 4 days old, so that they could perform a major surgery called the Kasai Procedure, in which part of the intestine is attached to the liver in hopes that the bile will drain. Charlotte’s Kasai was successful, but three days later she had to be rushed back for emergency surgery to repair an intestine leak. She recovered from both surgeries but spent the next few months in and out of the hospital for recurring cholangitis, an infection of the liver. Even though her bile was able to drain, because of her recurring infections, her liver damage kept getting worse and worse.

At 6 months old, she was listed for a liver transplant. We weren’t expecting it to happen for a long time since she was still relatively stable, but just a week after she was listed, we got the call that they had the perfect liver for her!

It was the scariest moment of my life sending her back for transplant surgery, not knowing what the outcome would be. We are so grateful for her team at CHOA in Atlanta who were amazing every step of the way. She recovered beautifully from the surgery and has been thriving since she received her gift of life! Once she got her transplant, she was finally able to gain weight and started catching up on all her developmental milestones so quickly. She is now a rambunctious toddler who loves to talk and play and climb everything in sight!

She will always be on immunosuppressants, so we must be careful to protect her from getting sick to the best of our ability, but aside from that we get to see our daughter get to be a normal, happy, healthy kid! Because of her liver transplant, we get to see our beautiful Charlotte grow up. We are forever grateful for her donor and their family 💚