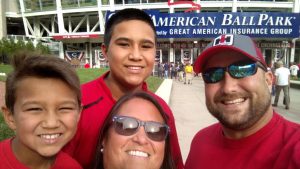 When Kyle was just 20 months old, he was diagnosed with Hypertrophic Cardiomyopathy. Luckily, the impact on his childhood was low.

It was not until April 2010 when he collapsed at 5:15 AM one morning. More severe issues came in 2013 when Kyle’s congestive heart failure started. In 2015, he was doing an exercise test. He thought he was doing a good job so it came as a shock when his cardiologist told him he would likely need a heart transplant. He was listed on the waiting list just three months later, in May 2015.

In September 2015, he decided to move temporarily from Ohio to Florida because of a greater availability of organs.  Unfortunately, he had to leave his family behind. His wife and kids visited him every five weeks while he was waiting.

He missed a lot while he was away. He missed his birthday with his family, Christmas, and his family’s birthdays.

The months went by, until one day his transplant coordinator said, “we have good news for you.”

He had been waiting so long; it did not even occur to him that a heart would be available until his transplant coordinator said, “we have a heart for you.”

When he heard the news, he was very excited. His wife and kids came down the next morning but did not get to see him before his surgery.  They did see the surgeon get off the ambulance with the new heart and were with him when he woke up from surgery.

Post-transplant, Kyle was able to move back to Ohio. He has had some minor organ rejection, but it has not been an issue.

“I’m not a superstar because I had a transplant. The superheroes are my family, friends, medical staff, and my donor’s family,” Kyle said.