In 1992, Steve was diagnosed with Primary Sclerosing Cholangitis, a form of liver disease. Fortunately, the disease progressed slowly and Steve’s doctors were able to keep it under control for many years.

Nearly ten years later, it had been so long since Steve was first diagnosed that he had forgotten the potential outcome – a liver transplant. In 2001, his doctor told him to start considering a transplant center. He knew he was very sick, but the thought of a transplant was still shocking.

Six years passed before Steve would require a liver transplant. In 2007, he was listed for the transplant but was not moving up on the list. He decided to search for a living donor.

First, he asked his younger brother if he would consider donation. His brother agreed but was not approved by the transplant center. He then went two months without a potential donor, but thankfully ended up with three other volunteers: his former roommate, his future brother-in-law, and his best friend’s uncle.

After his former roommate and future brother-in-law were ruled out, his best friend’s uncle, who was 56 at the time, was approved to become his living donor. 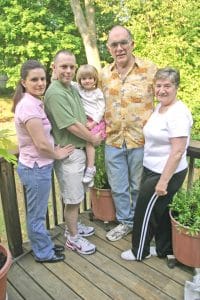 Throughout this journey, Steve and his living donor were featured on an ABC News special about transplant recipients and their living donors.

After his second transplant, Steve’s biggest challenge has been that he is unable to work. Despite challenges, Steve is grateful for his gift.

On the anniversaries of his transplants, Steve makes special social media posts about it to help raise awareness about organ donation and transplantation.