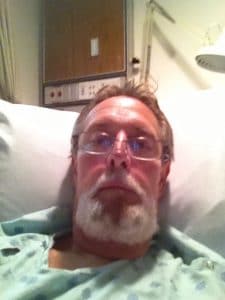 My transplant journey began at birth – I just didn’t know it until I was in my 50s. I was born in 1956 with a hole in my heart, and of course, it was undiagnosed because the technology was just not available in the fabulous 50s.

The amazing thing is I was always athletic growing up, not once did that hole in my heart limit me from anything I wanted to do.

What it did do was ruin my lungs over time, who knew. I remember when I was doing one of my physicals for football in high school my mother mentioned to the doctor that my fingers would turn blue, he wrote it off by telling her that my hands were just probably cold.

Fast forward to the year 2007. I was becoming short of breath, hard to catch my breath. I came down with a major cough and again had trouble breathing. I went to our local Urgent Care, the assistant measured my oxidation level, and it was 81, she promptly left the room, and in seconds all four urgent care doctors had entered the room. One of the doctors checked my oxidation level again, and it was down to 79 they immediately called an ambulance. I was in shock I did not understand what the big deal was I only had a cough! One of the doctors said I was in congestive heart failure, I called him crazy and off to the hospital I went.

And my transplant journey began!! I was diagnosed with Pulmonary Hyper Tention. I had Pulmonary pressure of 130 (normal is 30). The cardiologist that did the original Heart Cath had never seen pressure that high and did not know what to do. He did say that he was going to talk to some of his colleagues and get back to me. 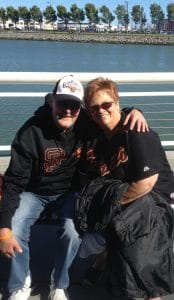 So, my wife and I got on the internet, big scary mistake!! Anyway, the cardiologist did have a suggestion; he asked if I would see a Pulmonary and Cardiologist in San Francisco at UCSF. We lived in the Sacramento area so I said I would walk over hot coals to get well.

After 5 years, many meds and tests, and 24 hours a day on oxygen, I was put on the lung transplant list in June of 2012. In those five years, my health continued to decline. I was a medical mystery to the whole transplant team. On 6 minute walks, my oxidation level would drop so low the machine would shut off, and I would still be walking away. It’s amazing what the human body can adjust to over time.

On October 28th, 2012, I got the call that changed my life forever, UCSF had lungs for me!!  By the way, they also repaired my heart!!

I’m not going to lie it was a difficult four months that included rejection, heart in a flutter, but I could breathe without added oxygen!! Yes, it was all worth it. I will be six years post in October of 2018. I hike, fish, golf – all with 99-100 oxidation level.

I reached out to my donor’s family with a letter of gratitude. Unfortunately, they chose to remain anonymous.

I’m good with that. I got the gift of life that I will never take for granted.