In 2005, Christy was diagnosed with heart failure. By 2014, she was told she would eventually need a heart transplant.

The news that a heart transplant would be in her future was not easy to hear, but with a history a heart problems, Christy was not terribly surprised. 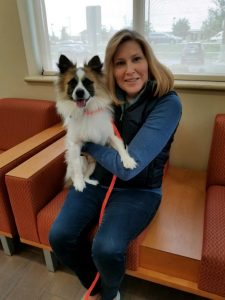 She tried to stay positive when she was waiting for the transplant.  She told herself that it was life’s way of testing her.

“It really puts life in perspective,” she said.

She waited 66 days for her transplant. When she received “the call” in October 2017, she was wasn’t scared to have the transplant, but it was definitely an emotional time.

“Receiving that phone call was the best thing that ever happened to me,” Christy said. “But it is very sad knowing someone had passed away.”

For Christy, facing the waiting list was especially difficult. While she struggled with her own illness, her sister also became very sick and passed away. Christy was in the hospital during her funeral and was unable to attend.

Despite all of the hurdles, she continuously told herself that she had to pick herself up and find positivity during a difficult time.

“It is definitely worth it not to give up, and attitude has a lot to do with it. Let the doctors do the medicine, you control the attitude. There will always be good days and bad days,” Christy explained.

While she was waiting for the transplant, she was determined to take walks around the hospital as much as possible. When her new heart became available, she even insisted on walking to the operating room.

“They thought I was crazy, but they ended up letting me walk next to the hospital bed.”

Post-transplant, Christy does whatever she can to raise awareness. She shares her story as much as she can and visits transplant patients in the hospital. Christy is passionate about giving back and helping those on the waiting list.

Christy encourages others to remain positive while on the waiting list.

“Find one good thing that happened that day and add it to a journal,” she suggests. “There is so much uncertainty. If today is slightly better than the day before, you are doing good.”

Christy compares the waiting list to a training period for a transplant.

“Life post-transplant has some ups and downs. Getting used all medications is a difficult process. I battled depression due to my medications. There was hair loss from my medications and the prednisone caused weight gain. All the side effects are typical but get better over time,” Christy said.

“All struggles, complications, and setbacks are worth it. Every day brings me joy”