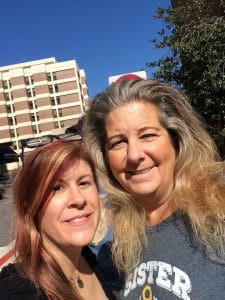 Michele always assumed that the only way to be an organ donor was to designate it on your driver’s license.  However, after a string of unexpected events, she became a living donor to a woman she had never met.

Michele lives in Florida, but her kidney now lives in California. The origin of her story can be credited to a band called Sister Hazel. The band had created a sense of community among its fans. One of the friends Michele made was a woman named Jan.

The band’s drummer encouraged the group of fans to talk about their health. That was when Michele discovered that Jan was on the waiting list. She had been waiting several years for a kidney transplant, and none of them knew about it.

Michele did some research about kidney transplants and discovered the concept of living donation. After researching and watching videos about donating a kidney, Michele sent Jan a message offering to be her living donor.

Jan was thankful for the offer but explained that she was a difficult match. That was when Michele told Jan about kidney paired exchanges.

Michele went through testing and was cleared for donation. Then, they set a date for surgery.

Two weeks before the scheduled surgery, Jan received “the call” that a kidney was available from a deceased donor. A young girl from Alabama had passed away in an accident and her parents donated her organs.

Jan was told it was a great match, but she felt guilty that she already had a donor lined up. She was advised by her doctor to accept the kidney.

Afterward, the transplant coordinator called Michele and told her that the exchange would no longer be happening since Jan received her kidney transplant.

However, Michele still wanted to go through with the donation.

“I was going to donate altruistically anyway,” she said. “Someone still needed a kidney out there.”

She flew up to Washington, DC for the surgery. Although she never found out exactly who the recipient of her kidney is, she was told it was a woman in her 50s. Michele received a letter from her recipient, and while she remained anonymous in the letter, she expressed her gratitude and promised to take great care of the kidney.

Michele is content with her recipient remaining anonymous. She feels like she does not need anything in return, she simply just wants her recipient to be happy and healthy.

Michele and Jan’s story was announced during a Sister Hazel concert. The entire audience had the opportunity to hear their story. Immediately following the heartfelt story, Michele’s boyfriend surprised her by proposing.