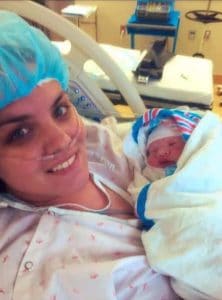 My name is Sarah Bradley, and I am from a small town called Roswell, NM. I’m a proud momma of two boys. I am also a heart transplant recipient.

Peripartum Cardiomyopathy. After a trip to our local ER and a flight from small-town Roswell, NM to Albuquerque, NM, that’s what I was diagnosed with. Heart failure and pregnancy!? What? Since when was that a thing and why was it never talked about?! Three years out and I still ask myself this question.

My journey was rough; I was separated from my oldest and my then newborn so that I would have a chance to survive. After an extended stay in Albuquerque and hopes that my heart was healing, I headed back home with a new baby in tow to my family. That was the end of February 2015. The beginning of March was a blur. I started to feel nauseous, light headed and overall dead tired. I could not keep anything down; I couldn’t sleep without sitting up, I couldn’t keep from coughing. I asked myself, “what is it now?”

I remember being rushed to the ER by ambulance and hearing the on-call cardiologist tell my family, “Her heart is only functioning at 5%. We need to stabilize her and get her out of here.” Onward I went back to Albuquerque where after a day they realized I would need more. It was a waiting game, but I was there to fight. I was in Albuquerque for about five days when I was told I would finally be headed to Mayo Clinic in Arizona.

After arriving in Arizona, I was placed into ICU and began the process of tests and procedures. I was told that I would need an LVAD to survive. It was my only chance. Along with that, I was told I would be placed on the organ transplant list. How did I get here? I just had a baby – how did that ruin my heart so much that I would need a whole new one?! On March 13, 2015, which ironically was Friday the 13th, my surgery began and my life as I knew it was changed forever. 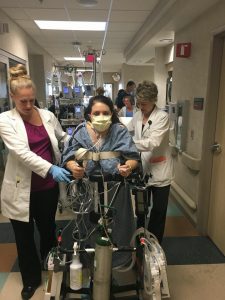 I went through a lot with my LVAD. I had a TIA, or mini-stroke, which prompted my team to get me activated on the list. I had the issue of antibodies which up until now I had no idea mattered in finding a donor. I went through numerous procedures with chemo treatments and plasmapheresis. The hope was to rid my body so I could be a better match. My body had other things in mind, and every trial ended up with “It’s not working Sarah.”

My last appointment in March 2017 after trying everything they could think of my doctors encouraged me to start looking at other hospitals to be dually listed. I remember specifically asking what we should do and the last thing I remember hearing was “pray for a miracle. You have a 2% chance of finding a match. We believe it’ll happen we just don’t know when.” I had already passed my two-year mark. You know that feeling when the wind gets knocked out of you, and you have trouble breathing? That’s what those words felt like and that had been the most honest words my team could have given me because after that I prayed like I never had before. And I lived like I never had before.

April 16, 2017, was Easter Sunday. We were getting ready for Easter with my family when I received a call from an unknown number. It was my team telling me, “Sarah, we have an Easter present for you.” “How fast can you get here?” A lot of rushing around and a lot of prayers we made it there and on April 17, 2017, I was transplanted.

To live like there’s no tomorrow is easier said than done. But I believe for those two years that I waited that’s how I lived. I am now a year and two months out from transplant and have not been blessed yet to meet my donor’s family or learn more about them. But I continue to try and live my life to the fullest and try to make my donor proud. Because this gift is the gift of all gifts and I do not want to squander it.