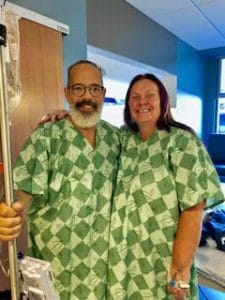 Moises’ transplant journey began when his doctor diagnosed him with kidney disease during an evaluation for Gastric Bypass surgery.

The progression of Moises’ kidney disease started slowly but increased over the next five years. He knew that he would soon need dialysis but always thought a transplant would come first.

Moises is a hairdresser and owns his own business. At the time, he discovered that he needed a second job so he could obtain better medical benefits.

Around two years ago, he became very ill and ended up on emergency dialysis. He was admitted to the hospital and could no longer work.

However, he discovered that he had clients that were interested in being his living donor.

Two of his clients had a mutual friend, Shelley, who expressed interested in donating. When she got tested and found out that she was not a match, she then suggested kidney paired exchange.

Moises was visiting his parents in Florida when he received a call from Shelley. She called to tell Moises that a match was found for her kidney. She was going to become a donor, which meant Moises’ life was about to change. 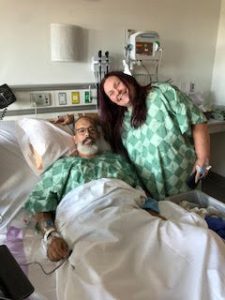 Through kidney paired exchange, Shelley donated to a stranger, and Moises received a kidney from an anonymous donor from Ohio.

Both Moises and Shelley had successful surgeries. Moises met Shelley for the first time at the hospital.

“We were instant friends,” he said. “When I met her, I couldn’t stop crying.”

Shelley was previously a surrogate for three families. When she exceeded the age for surrogacy, she decided she wanted to donate a kidney.

Shelley even started a fundraiser to help Moises with medical bills. The fundraiser raised more than $11,000.

“The fundraiser really helped me with medical bills and medication expenses,” he said. “I try to save as much money as I can.”

Moises noted that he worries about the 36-month limit that Medicare will pay for immunosuppressive drugs.

Post-transplant, Moises is doing well. He joined a square-dancing club and does everything he can to keep himself healthy.