Through childhood and adolescence, NauBriana had not experienced a need for eyeglasses or contacts. However, in 2008, she began to experience disturbances in her vision as she was driving home one day. She figured that perhaps she needed prescription eyeglasses that would help her while driving or reading while in the classroom, but she soon realized the true severity of what was happening to her eye-sight. 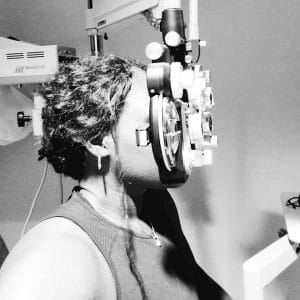 During her first visit to an optometrist, she was told that it may be worth visiting a specialist who is an expert with individuals who experience similar eye issues as her. Following her consultation with this recommended eye specialist, she was diagnosed with Keratoconus—what her original optometrist suspected she may have had. Keratoconus is a condition where the clear tissue on the front of the eye develops a bulging shape underneath—creating a cone-like shape of the eye and thinning of the cornea. At that point in time, her specialist tried hard to help correct her vision with special contacts built for early-onset keratoconus, but by then her condition was too far gone.

With the disease progressing in NauBriana, she was soon not able to drive, to read, or to see herself in the mirror. She was, by legal definition, blind. As a result, she had to withdraw from her college education at that point in her life. She developed feelings of depression and anxiety, as well as frequently feeling burdensome to her loved ones for needing to rely on them to help her get around.

She then sought out a second opinion from another eye specialist who told her that there was so much scar tissue and bulging of the cornea that no amount of corrective contact lenses could help her. This was news to her, since the first specialist she had seen who gave her the diagnosis had not explained the severity of the disease or the possible need for transplant if it progressed. She had been a candidate for a double cornea transplant for longer than she thought. 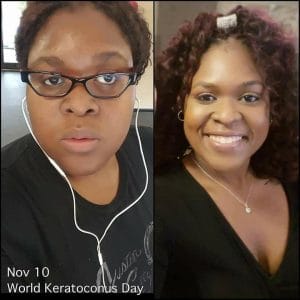 By 2011, she was able to receive a singular, successful cornea transplant, which improved her vision significantly, but not completely. Because of the large financial expense, she had to save up her money to afford the following corneal transplant. Within the next few years, she was able to follow through with her second transplant. However, it was at that time she was informed she was pregnant the same day of her scheduled surgery, right before the anesthesiologist approached her hospital bed.

This came as a huge shock to NauBriana and her partner, as she was then 7 months pregnant with only 2 months until her baby would arrive! “I had to recover from childbirth and build another savings for the right eye transplant,” she recalls. This made her feel an overwhelming amount of gratitude for being so blessed, however, this would put off her last transplant until she recovered from childbirth. 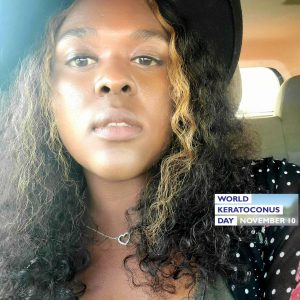 It was not until 2017 that she was able to receive her right cornea transplant. “It wasn’t until then that I could finally see my baby’s face clearly,” NauBriana stated.

The process of her transplantation taught her not just about being grateful, but to also know how to advocate for herself. NauBriana expressed that she hopes to become a partner with Donate Life America using her own campaign to bring awareness to and encourage others to become organ donors.

“I would like to become a partner and educate others on the importance of becoming an organ donor- especially minorities,” she stated. Since her corneal transplants, advocacy has become a true passion of hers. She realized her passion for bringing awareness to organ donation after being able to successfully convince several of her loved ones to register as organ donors, as well. NauBriana has a blog titled, Extreme Visionary, that she uses as her platform to discuss topics such as health and wellness and encouraging organ donation. She hopes to continue spreading awareness of how important organ donation is not only in her community but to as many people as she can.